A superyacht is not one of those things you might forget where you left it, no matter how rich you are or how many such pleasure craft you own. Neither is it a small trinket you could abandon on a whim.

Yet Sarafsa, a beautiful, custom-built superyacht valued at nearly $68 million, has been abandoned in Monaco. It’s been “left to rot,” as superyacht vlogger eSysman says in his most recent video report, available (and time-stamped accordingly) at the bottom of the page. The report includes recent photos of the superyacht, showing it in very poor condition, with clear signs of neglect.

Of course, not even the most careless billionaire would leave an asset as valuable as a superyacht to rot just for the heck of it, so this is not that. Sarafsa is, indeed, “rotting” away in a marina, and no one is rushing to do basic maintenance and repairs on it, but it’s not because the owner doesn’t care. It’s because it no longer has one, and it’s stuck in legal limbo.

Sarafsa was delivered to the owner in 2008 by the UK-based Devonport Yachts. Construction took place at the Appledore shipyard as a fully-custom project whose details were never made known to the general public. The owner preferred it that way, because the owner was billionaire Prince Fahd bin Sultan Al Saud, the governor of the Tabuk province in Saudi Arabia since July 1987.

Bin Sultan wanted a vessel that would be the perfect family boat but with extra capacity for entertaining. The result was Sarafsa, a 269-foot (82-meter) six-decker that provided accommodation for 14 guests in seven staterooms, and a crew of 23 in another 10 cabins. The naval architecture by Burness Corlett Three Quays offered a generous volume of 3,179 GT, while Winch Design handled both exterior and interior design in accordance to the client’s preferences.

Until this year, Sarafsa was never offered for charter, nor was it shown to the public at large. Used solely by the Prince and his family, its first brush with controversy came in early 2022, when it was revealed that the Prince was being sued by Credit Suisse Group over an unpaid loan to finance the superyacht and a multi-million mansion outside London. The Prince, it emerged, guaranteed for the loan with the assets, so by summer 2022, both had been frozen.

Also last summer, Sarafsa made its first appearance on the market, with Burgess Yachts listing it with a €65 million ($67.7 million at the current exchange rate) asking price. The broker noted that this was an unparalleled opportunity for a discerning seafarer to get their hands on a vessel that still delivered top performance in a luxurious package.

Photos showed interiors that would definitely be deemed worthy of royalty: Sarafsa has not just the amenities but also the finishes of a five-star exclusive resort. Amenities include two massive formal dining salons; a master’s suite with an apartment-sized bathroom, a lounge, and a private terrace with moving glass walls and a full bar; a wellness area with a jacuzzi, hamam, sauna and gym; a touch and go helipad; a packed garage, including water toys and matching tenders of various sizes; a cinema, a hair saloon, and a sky lounge with a wood-panneled bar with marble countertops and leather seats.

Finishes are equally impressive, for a very oriental slash regal vibe: exotic woods combined with marble, plush rugs, mirrors and fine art deliver sensory overload, for interiors that would overwhelm anyone but a billionaire. That’s not an exaggeration: photos in the gallery show that Sarafsa was designed to impress through sheer opulence, and it does just that.

Performance-wise, Sarafsa might be an older build, but it’s still capable of holding its own. Powered by twin MTU diesel engines of 2,682 hp each, it can travel at a top speed of 16 knots (18.4 mph / 30 kph) and has transoceanic range of 6,000 nautical miles (6,900 miles/11,100 km) at cruising speed. Zero-speed stabilizers make any stay at anchor very comfortable.

With all this going on in favor of Sarafsa, you’d think it would have sold by now, even in the current context of an economic downfall. As it turns out, it hasn’t: since the legal case over the outstanding loan is still ongoing, the superyacht has been moved to a marina in Monaco, where it’s been abandoned. There is still crew onboard, but no word on who is paying them, if they’re paid at all. Clearly, whoever is handling Sarafsa’s management right now doesn’t consider basic maintenance a priority, hence its terrible condition. 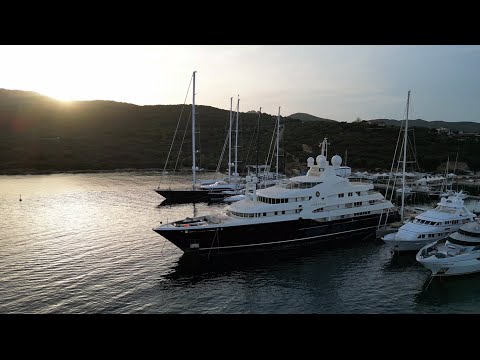