Years before the Cobra, GT350, or GT40, automotive legend Carroll Shelby played a key role in the creation of three exquisite Chevy Corvettes that featured Ferrari-like bodies handcrafted in Italy.

Today, the Corvette is finally a mid-engine supercar that looks and performs like a Ferrari, but back in the late 1950s, when the very first generation was introduced, the story was different. While it was by no means ugly, the C1 was nowhere near the prancing horses unleashed from the Maranello stables in terms of performance and drivability.

That being said, the sports car’s small block was much more reliable and easier to modify, but some enthusiasts wanted more than just a tuned Corvette.

One of those people was Gary Laughlin of Fort Worth, Texas, who frequently raced Ferraris. A wealthy oil-drilling contractor and Chevy dealership owner, he happened to be friends with fellow Texans Jim Hall and Carroll Shelby.

The idea of a lightweight, Italian-bodied Corvette frequently came up in their conversation. As insane as such a car sounded back then, Laughlin’s bottomless pockets combined with Hall and Shelby’s engineering expertise were enough to make it happen. In 1959, things quickly moved from a farfetched idea to an actual project, with each Texan set to get his own Italian ‘Vette.

Thanks to Pete Coltrin, Road & Track’s correspondent in Italy, Shelby managed to get in touch with Sergio Scaglietti, the man behind one of the country’s most prolific coachbuilders, and convinced him to build the cars. Located across the road from Ferrari’s headquarters, Carrozzeria Scaglietti was the place where motorsport icons like the 250 Testa Rossa received lightweight, elegantly stylized bodies.

In the months that followed, the trio’s close relationship with Chevrolet’s chief engineer Ed Cole enabled them to get a hold of three rolling chassis and have them delivered to Italy. Although Scaglietti promised to have the cars ready in a few months, it took almost two years until they were shipped back to the U.S.

Distinctively Italian, the completed ‘Vettes received new aluminum bodies that resembled the era’s most beautiful Ferraris. None were identical since each future owner had different tastes. For example, the chassis built for Laughlin featured the C1’s original front grille, while the other two came with custom grilles as well as reshaped rear ends.

Variations also occurred under the hood. Shelby’s car (featured in this article) was powered by a 315-hp Ramjet fuel-injected version of the 283-ci (4.3-liter) small-block mated to a Borg-Warner T-10 four-speed manual, whereas the other two were initially fitted with four-barrel-carb variants linked to Powerglide automatics.

Apart from a competition-spec fuel cell that replaced the standard tank, all other chassis components were stock. That means that the three bespoke rides dubbed Corvette Italia came with drum brakes behind all four wheels, independent front suspension in the front, and a solid axle supported by leaf springs in the rear.

Despite Shelby and Hall’s efforts, the cars never lived up to the expectations of outperforming the era’s Ferraris. Even if they were around 400 pounds (181 kg) lighter than any production C1, the chassis setup made them feel heavy and imprecise.

To make matters worse, the Texans were pressured by GM to cease any further development of the clandestine exotics, while across the Atlantic, an infuriated Enzo Ferrari threatened to end the partnership with Scaglietti if he continued to work with the Americans.

In the years that followed, the two carbureted small-block cars were upgraded with the same powertrain setups as Shelby’s variant, as well as a series of scoops.

All of them have survived after exchanging owners multiple times.The one built for the Le Mans-winning driver and engineer has become the most coveted, even though he never actually owned it. Shortly after it was shipped back from Italy, Shelby claimed it was too expensive for what it could do and ended up pulling out of the deal. The car is currently part of the Petersen Automotive Museum collection.

In the YouTube video below by CarCast with Adam Carolla, you can take a virtual tour of this gorgeous coachbuilt Corvette. 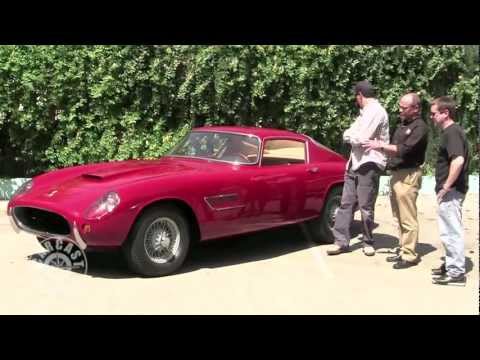