3 Rod Millen Drives Pikes Peak Toyota Tacoma Up The Mountain, It's Like 1999 All Over Again

5 Oil Giant Makes Green Diesel With Used Cooking Oil, It Is Not for Sale Just Yet
Car video reviews:
Coverstory

A monstrous 1,400-hp race car hidden under a beat-up 1949 Ford F-1 body, Old Smokey is one of the most fascinating vehicles to ever compete at the Pikes Peak International Hillclimb.

The Story of Old Smokey: From $225 Craigslist Clunker to Pikes Peak Record-Breaker

The story of this epic build starts in the mid-2010s when Chuckles Garage owner and lead fabricator Scott Birdsall stumbled upon a grossly neglected 1949 Ford F-1 while browsing Craigslist. Even though the truck was in a sorry state, the asking price was too good to turn down, so he brought it thinking that he could clean it and sell it for a quick profit.

Scott always had a soft spot for these 1948-1952 “monkey-faced” Fords so during the months that followed, he decided to keep the old rust bucket and transform it into a shop truck. Using the now rust-free yet patina-laden body, Scott and his team went on to make slight chassis modifications such as a Mustang II-style suspension and fitted a Cummins turbo-diesel borrowed from a 1994 Dodge Ram into the venerable Ford’s engine bay.

As the build was progressing, Scott began thinking that the 160 hp that he was getting from the stock Cummins was simply not enough, which led to a series of additional engine mods. At first, a bigger turbo was installed, but that proved to be unsatisfactory, so higher-flow injectors followed.

Things quickly snowballed towards a twin-turbo setup, then the whole engine was moved back halfway into the firewall for better weight distribution. Of course, the increased power required bigger brakes and a new front suspension, so in the end, Scott decided to go all by swapping the old chassis with a custom, NASCAR-style variant and gave it a newer, more capable Cummins diesel from a 2005 Freightliner.

By the time all these mods were installed, the old Ford was no longer a shop truck candidate, but a high-performance road racer. Thanks to its uniqueness, it quickly became a social media sensation, which led many companies to sponsor the project.

Now known as Old Smokey, the race truck was entered in various quater-mile, and drifting competitions where it became even more popular. The mods continued, and apart from the constant mechanical upgrades, it was eventually fitted with a huge rear wing, a front splitter, and a carbon undertray so that it could compete in time attack races.

From there, Scott set his sights on mountain racing and, of course, the most famous event of them all: the Pikes Peak International Hillclimb. After being denied entry in 2017, Scott and Old Smokey eventually made their Pikes Peak debut in 2018.

Unfortunately, a serious crash during an early practice run followed by an engine failure during qualifying ended Scott’s pursuit for glory prematurely. He was back at it in 2019, but this time, rain and hail got in the way.

The curse broke in 2020 when despite an engine failure during qualifying, Scott and Old Smokey managed to compete in the main event, climbing the 12.4-mile (19 km) course in 11 minutes and 24.065 seconds. This time made Old Smokey the fastest diesel-powered vehicle to ever race at Pikes Peak, surpassing the record previously held by the Mercedes-Benz factory team.

Apart from a lot of hard work and determination, this feat was made possible by a near-flawless setup and a whole lot of power. In its record-setting configuration, Old Smokey was powered by a heavily modified, 6.7-liter Cummins inline-six capable of spitting out around 1,400 hp. Even more impressive, the compound turbo system with its two huge Garrett turbochargers capable of 106 psi (7.3 bar) of boost helped the diesel engine send no less than 2,111 lb-ft (2,862 Nm) of torque to the rear wheels.

Yes, Old Smokey is diesel-powered and despite being one of the coolest racing machines ever built, some of you environmentally conscious readers would rather kill it with fire than give it the respect it deserves. However, before you go grab a torch, consider that this badass truck ran at Pikes Peak on NexGen’s novel NexDiesel, a renewable fuel that contains no petroleum products. While it may not be as clean as your overpriced Tesla, Old Smokey doesn’t live up to its name in terms of emissions and apart from being a Pikes Peak legend, it’s also a renewable fuel pioneer.

If you would like to learn more about this amazing build and see it perform on the track, we recommend watching the YouTube video below by To Gear. 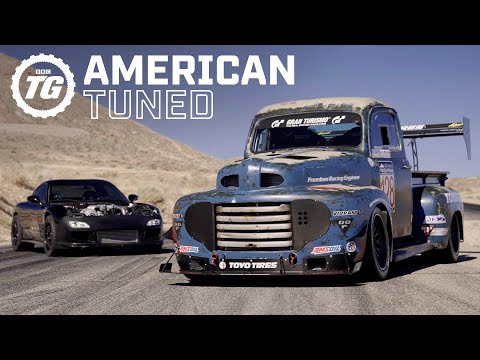