2 Ford 4.6-Liter Modular: the Most Misunderstood American V8 Ever Built

5 The History of the Iconic HEMI: From Experimental Aircraft Engine to the 426 Elephant
Car video reviews:
Coverstory

In 1964, Ford introduced this incredible powerplant as a response to Chrysler’s NASCAR-conquering 426 HEMI. While things didn’t go quite as planned, it remains one of the most impressive V8 engines ever conceived.

For many car enthusiasts, particularly those who have an affinity for powerful American V8 engines, the 1960s was undoubtedly the greatest era in automotive history. In the U.S., the horsepower war was reaching its pinnacle, giving birth to muscle car icons that hid some unbelievable powerplants under their hood.

While emission and safety regulations forced carmakers to limit their power in street-legal cars, the true potential of these eight-cylinder icons was showcased on track.

After a failed attempt to buy out Ferrari, Ford set out on an ambitious endeavor to humiliate the Italians in the most prestigious race of them all, the 24 Hours of Le Mans. With the 427 “side-oiler” version of its Gen 2 FE and later, a heavily modified 302 Windsor mounted in the middle of the continually-improved GT40 chassis, the Americans eventually succeeded, crossing the finish line first on four consecutive occasions, from 1966 to 1969.

But, before this resounding international success, Ford was caught off guard back home by crosstown rivals Chrysler and their brand-new 426 HEMI, also known as the Elephant engine.

The year was 1964, and at the Daytona 500, Ford got its behind kicked by Elephant-powered Plymouths, who earned a memorable 1-2-3 finish. Suddenly, the Blue Oval's NASCAR hegemony seemed destined to end, so engineers rushed to develop a new engine that could remain competitive against the gargantuan HEMI.

The answer came in the form of an equally humongous, 427-ci (7.0-liter), single overhead cam (SOHC) V8 that would become affectionately known as “Cammer."

At the time Ford was pouring all its motorsport resources into the GT40 project as well as the development of a new Indy DOHC Indy engine, so for the proposed HEMI destroyer, engineers had to be creative.

To keep costs down and finish the unit in record time, they took the 427 FE “side-oiler” and proceeded to transform it into an Elephant slayer. The race-proven block and internals were mostly unchanged, with the only upgrades being an idler gear added to the camshaft bore, a revised lubrication system, and cross-bolted main bearing caps designed to handle the extra power that the engineers were aiming for.

While the block was largely the same as the one on the 427, which would help Ford achieve a 1-2-3 finish at Le Mans two years later, the Cammer’s upper end was different. The cast-iron heads (revised to aluminum in later iterations) were designed with fully machined, hemispherical combustion chambers, making the engine a hemi in its own right.

On top, each head featured a single overhead camshaft that operated shaft-mounted roller rockers. The valvetrain contained larger valves than those on Ford’s conventional wedge heads. Mounted on dual springs, they were machined out of stainless steel, and those that handled the exhaust were sodium-filled to prevent the valve heads from burning.

Perhaps the most fascinating feature of the Cammer was the 6-foot (1.8 m) timing chain, which drove both overhead cams. Cheaper and quicker to develop than gear drive setup, it was nowhere near as effective since it stretched under high load. This was countered by varying the cam timing from one side to the other by four to eight degrees between banks to compensate, but it remained one of the engine's main weaknesses. Moreover, because the chain rotated in a single direction, the cams also rotated in the same direction. This required a unique design for each cam, with one mirroring the other.

Known internally as “ the 90-day wonder” because legend has it that’s how much time it took to develop it, the SOHC 427 started as a quick side project and suddenly became Ford’s greatest engine. The engineering department, management, and of course, the race drivers who got to test it were in awe of its immense power potential.

Unfortunately, NASCAR head Bill France did not share the enthusiasm and banned the unit as he believed that overhead cam engines were too European. Ford continued to lobby for its homologation, arguing that it was the only worthy adversary for the HEMI, but despite the carmaker’s efforts and public demand, NASCAR did not budge. Furthermore, the sanctioning body went on to put an end to these purpose-built engines that they argued turned stock cars into "not-stock cars, banning the HEMI from the competition for the 1965 season.

The ban was eventually lifted in 1966, but Ford was only allowed to use the Cammer with one small four-barrel carb. Even worse, the manufacturer could only use it in the full-size Galaxie, which meant that Ford had to manage a whopping 430-pound (195 kg) weight disadvantage over the HEMI-powered Dodges and Plymouths. By that time, the Blue Oval said “no, thank you” and withdrew its financial support from the series.

Despite never registering an official NASCAR lap, the Cammer went on to make a name for itself on the drag strip. It contributed to the fast-paced evolution of the Funny Car class thanks to Ford's direct involvement in the sport via its Total Performance racing department and became the basis for some very successful supercharged Top Fuel dragsters, including those of legends Connie Kalitta, Lew “Sneaky Pete” Robinson, and Lou Baney - the latter being driven by Don "the Snake" Prudhomme.

The SOHC 427 was (sadly) never fitted into a production model – for obvious reasons – but those who had about $2,300 ($19,574 in today's money) to spare could buy one from select dealerships.

While no official production figures exist, it is estimated that Ford built around 500 of these fascinating engines from 1964 to 1967. Most of them were heavily modified throughout the years, which makes a factory-spec Cammer extremely rare these days. Nevertheless, some units pop up at auctions from time to time, like the one featured in the gallery, which went under the hammer at a Bonhams auction in 2019.

Although it never got a chance to compete against the Elephant under the hood of a stock car, the Crammer still managed to become a legend. Nearly 60 years after its introduction, it’s still one of Ford’s greatest engines and one of the most impressive naturally-aspirated V8s of all time.

If you want to see it in action, we recommend watching the video below by Unity MotorSports Garage. It dives deeper into the modifications that the Cammer received during its years of service on the drag strip and features original footage as well as interviews with the legends of the era. 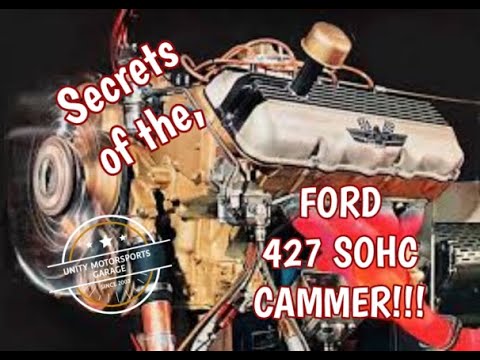