3 A Super-Yacht You Can Rent. The TaTii Charter

The SS18, One of the Worlds Coolest and Smallest Super-Yachts, Is Fast

Cristian Curmei
Unveiled at the Monaco Yacht Show, this elegant mix between a water-plane and a catamaran design has resulted in the SS18. As you can see, the yacht bit is that little part up top, suspended on two large catamaran beams.
15 photos

By definition it’s not a catamaran even though it looks like one, and it isn’t a water-plane either. It’s rather a mixture of the two, and unlike other super-yachts, this one is considerably smaller and less fitting of all the perks you’d usually have. Heck I don’t think there’s any really. But honestly, it looks ‘perk’ enough.

The SS18 is brought to us by Glider Yachts in conjunction with Burgess Marine, one of the world’s largest ship builders. A giant deal between the two have allowed Glider Yachts to build every SS18 within Burgess Facilities. Once completed, the SS18’s are on to Inwards Marine to handle sales and world-wide distribution for these bad boys.

When you first see it, its shape is what hits you in the neurons. The two beams, given their needle-like design, cut through water like a hot knife through butter. another benefit of this is that the hull doesn’t touch the water, thus reducing surface drag. Its aerodynamic shape isn’t meant just for the water either. At the speed this thing flies, even the hull has aerodynamic properties. The upper ‘deck’ is basically just a cockpit and controls, but it’s customizable to the client’s request. But once again, that allows you to just mess with the color scheme, possibly the materials.

Imagine rolling into a bay on this thing. Suddenly everyone is just looking at you suspended in the air on floating stilts. And once you’ve got everyone’s attention, punch the throttle on this sucker and shoot out of sight at nearly 60 knots an hour, faster than your average jet-ski. This incredible speed is offered by not one or two engines, but four. Four engines with 270 hp each.

Just to put the speed into perspective, you can get from Miami to the Bahamas in under an hour. But in case that’s not enough for you, and you’d like to be the local silver bullet, Glider Yachts does have in plan SS18 versions that can hit 100 knots.

One of the key features of this vessel is its stability control system. This software allows the ’18 to monitor wave conditions, speed, and even hull shape, regulating each factor in such a way as to offer a safe and stable ride at the highest possible speed. Yes, even the hull itself can be modified to do this and is one of the main reasons as to why the SS18 costs upwards of 1.2 million U.S.

The interior of the SS18 is very similar to that of an air-craft cockpit. Everything is made with carbon fiber panels and a chrome finish. Touch-screen displays with Garmin software make sure all systems are functional and easily accessible. Other than that, there is just space for another four people. No helipads, no beach-deck, no jungles.

“We are absolutely thrilled to finally show-off the first Glider to the world,” says Rob McCall. “She is one of the most exciting marine developments in recent years, with eight years in research, design and development, so we’re excited to tell everyone about her daringly different design and revolutionary performance. The SS18 is unlike any other yacht seen in the market to date, with unparalleled design and technological capabilities - we’re sure she is going to be a real game-changer in the superyacht market.”

So even though it’s not full of bells and whistles, this speed-demon is bell and whistle enough. Oh, and I nearly forgot to mention. Because the beams distribute the weight of the vessel over a long surface area, it reduces the amount of vessel below the surface, meaning you can just glide into a shallow cove or a small port. Heck, it seems like you could take this thing out on the lake. 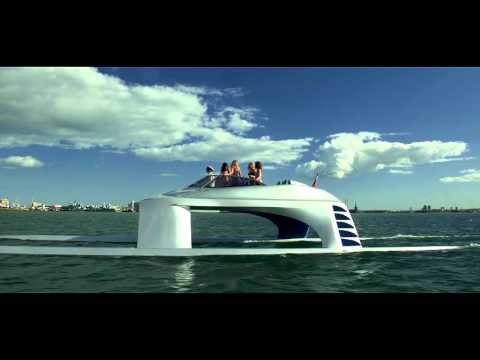