1 Piaggio Launches Vespa Pic Nic, Is Designed to Help You Rediscover the Beauty of Nature

3 Piaggio Gitamini Is a Cute, Small Cargo Robot That Will Walk With You

4 Piaggio 1 E-Scooter Finally Hits the Market, It Aims to Please the Youngsters

"Ape" means "bee" in Italian. So please be considerate about the tiny vehicle and the hardworking insect and say the name correctly ("A" as in Alaska, "pe" as in Pennsylvania. Think of appe-tizer and stop monkeying around). The namesake holds its legacy high, for it was the perfect solution for a war-stricken Italy to go about its business. Literally, as cars were expensive, many Italians adopted the Ape as their vehicle of choice for taking goods from one point to another.

But that was 74 years ago. Today the Ape continues its story and sometimes finds new meaning in the form of recreational motoring. One such Ape became what might possibly be the smallest camper in the world (of average-sized human beings). Arguably, since there are many other claims to the title, but still, this is quite different. It's hard to imagine how a grown man or woman can actually fit on the platform of an Ape, given that the total length of the vehicle is a nudge over eight feet (2.5 meters), and this measurement includes the driver's cabin and front wheel. So Steven Dawe from England took the challenge of transforming the former olive oil carrier into a full micro camper (have a look at the video below to see the entire project unveiled in the author's narration).

His Ape of choice was the rear-mounted engine Piaggio MP600. The scooter base needed restoring, as did the flatbed trike and engine. Adding a bespoke plywood removable pod fitted with a window completed the transformation of the Ape into a minuscule but practical campervan.

The roller-mounted electrically-extending bed is large enough to (intimately) accommodate two people (6'3" inches – 1.9m – long by 3'3" – 1m – wide). As for the door, the top half of a second-hand typical caravan stable door from eBay closed the deal.

Tiny as it may seem, it has everything a camper may necessitate on the road: a very efficient small refrigerator, which "takes about 5 Amps initially. It cools down pretty quickly. Then it comes on about 5 minutes every half hour or so. Keeping it full of food (or drink) makes it much more efficient as it takes much longer to warm up again", as the builder claims. Separately, a charcoal burner takes care of heating, boiling a small kettle – did I mention Steve is English? – and water heating (see the coals burn in the second video at the end and get details from Steve himself).

Overall, this "self-contained camper van for two has a sink with hot and cold running water, a draining board, and a three-burner hob, which can be used in situ or rolled outside and used on legs. It has its own solar-powered electric system."

Steve affectionately named the newly-converted Ape Olive - the Micro Camper, after the color of the sofa tapestry. For an extra touch of love, the curtains are also Steve's own work, with the help of his wife's sewing machine. 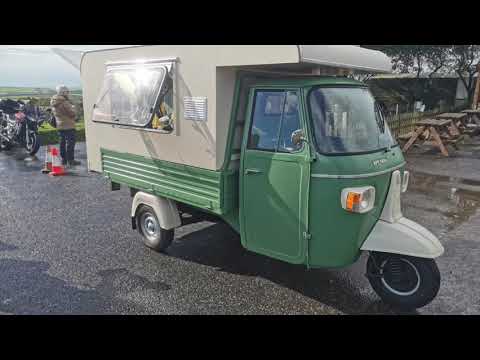 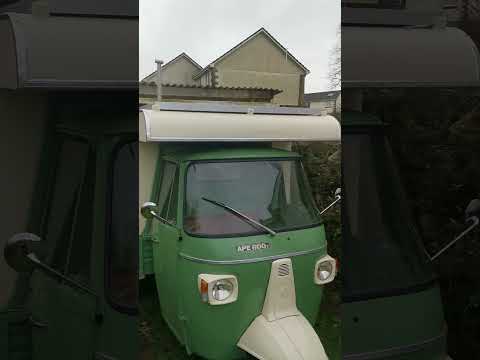