As the saying goes, it’s the little things that matter. Smacircle is one of those little things: an electric sitting scooter with big e-bike dreams, which can fold down to half its size and can easily fit into a backpack.

The Smacircle S1 has been around since 2017, when it started crowdfunding on IndieGoGo and immediately topped even the most optimistic expectations. Today, boasting at least a handful of industry awards, including the title of CES 2020 Innovation Awards Honoree, it is being sold worldwide and proudly continues to put the “micro” in “micromobility,” and the fun back in the daily commute.

For the record, it doesn’t seem like all backers of the Smacircle S1 got the units they paid for, even after all these years. At the same time, the company is selling these e-bikes internationally and has received plenty of media coverage for being able to bring a crowdfunding product into mass production.

So what exactly is a Smacircle? The name is a combination of “small,” “smart” and “circle,” and it refers to a sitting scooter with an eyeglasses-shaped carbon fiber frame. It lacks pedals, so it’s most definitely not an electric bicycle, but it’s being marketed (and has been so since day one) as the world’s tiniest, lightest and most convenient e-bike.

The whole thing rolls on tiny, 8-inch solid tires and, based on customer reviews, it’s stable enough on the pavement and in traffic, even when going over rougher patches. The design is striking and instantly memorable, both when open and folded down, which is a process that takes only seconds. The Smacircle might look somewhat funny with a fully-grown person on it but, hey, at least it beats walking, right?

The frame is made of carbon fiber, which makes it strong enough to hold a maximum payload of 220 pounds (100 kg) and light enough to make for an e-bike that weighs just 19 pounds (8.6 kg) once the battery is removed. This makes it ideal as a first- and last-mile solution, since it can fold down and fit into a specially designed backpack or a carry-on bag, which you can then take up to the office with you or onto public transport.

The seat contains the 5.5 AH, 200.8 Wh battery, while the 250W motor in the rear wheel will take this contraption to top speeds of 13 mph (20 kph). It’s not blisteringly fast, but then again, just how fast do you want to go on something that rolls on such tiny wheels? Range is estimated at 11-13 miles (17-20 km), which, again, makes it a perfect last-mile solution for the daily commute. A full charge is achieved in 3.5 hours.

The Smacircle is smart, too. To keep the design clean, it doesn’t include a display, so you have to pair it with the dedicated app in order to unlock it, keep an eye on vital stats, adjust the lighting, or set your preferred riding mode. Speaking of riding modes, you get two of them: normal mode, which maxes out at 9 mph (15 kph) and sport mode, which tops out at 13 mph (20 kph).

Electronic brakes activated at the touch of a button offer stopping power, while front and rear lights will make you visible in traffic, should you wish to take it to the streets. The makers say that the Smacircle can tackle inclines of up to 12 degrees.

The Smacircle is offered as the S1, with a $1,399 price tag, and the S1 Tailored Version, of which only 100 units will be made and delivered worldwide. The latter costs $1,498 and comes in a bright green color, but with the same specifications as its non-limited-series sibling.

For an e-bike that’s not even an e-bike, that’s real, full-size e-bike money right there. Then again, you can’t fold down an e-bike to the compact size of the Smacircle, and that remains its highest selling point. 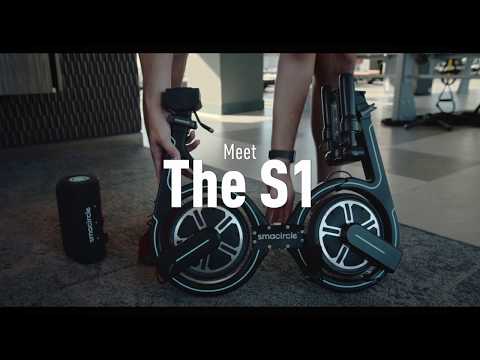