3 The New Campworks NS-1 Teardrop Trailer Is Just as Badass But Better, Can Now Charge EVs

4 Rare 1947 Kit Kamper Is the Great-Grandfather of Teardrop Trailers, Sells With No Reserve

5 DIYer Converts a 1965 Beetle Into a Teardrop Trailer, Makes for One Snuggly Camper
Up Next

Elena Gorgan
No one chooses a teardrop or teardrop-style trailer thinking they’re getting a proper apartment on wheels. One such towable is appealing precisely because it’s small enough to be towed easily and without additional expenses to upgrade the towing vehicle.
19 photos

Yet this is exactly what Gidget promised: the closest thing to a proper apartment on wheels, but in the compact form factor of a teardrop trailer, at a comparable price, and with all the creature comforts of home. It was glamping upgraded, and Gidget did it with a very retro-looking, quite awesome trailer.

Gidget is a cautionary tale, perhaps the oldest kind in the (business) book: the cautionary tale of an awesome product and sound business idea, run into the ground by bad management and greed. As of 2022, Gidget no longer exists, in the sense that it hasn’t been in production since late 2017, but units still roam around in Australia, New Zealand, and the U.S.

Gidget was an Australian company founded by Glenn Wills and Christine Bree, launched in 2013 with a teardrop trailer that promised a revolution in glamping. The Gidget Retro Trailer, as it was generally referred to, featured a patented slide-out that doubled interior space to allow a full-size queen bed inside. As such, it was ideal for whatever you had in mind, whether that was hitting the road with your special someone during the weekend, or working on the road for a longer term.

Three models of the trailer were sold until 2017, Bells, Bondi, and the Noosa, with a fourth one introduced right before the company went belly up, the Brumby all-wheel off-road model. Deliveries of Brumpy never took place. Pricing started at $26,900 for the cheaper Bells model and went up to $39,750 for the larger and better-specced Noosa, which also came with a series of possible upgrades at an extra cost. Said upgrades included the possibility of adding a special shower and toilet compartment, with a hot water handheld shower and a portable cassette toilet: it was not much, but it was a lot for a teardrop trailer.

As you can see in the video available at the bottom of the page, of the Bondi model, the Gidget Retro trailer was not just good-looking, but very functional. You got the bed in the back, with the option to convert the area into a lounge, which would then double as an office thanks to a pull-out table. You had plenty of storage, both under the bed and on the rear wall, as well as a rotating center console with a TV and a radio, for entertainment.

The kitchen was in the tailgate and included a sink with pressurized water, an ice box you could upgrade to a fridge, a ceramic two-burner cooktop with a windbreaker, and drawers for storage. The kitchen was made with handcrafted local wood, and it looked beautiful.

The slide-out featured a skylight and flat 110W solar panel, and you could choose from a series of options regarding colors, finishes, and even curtains. Again, by teardrop standards, the Gidget was quite the package and, while compact, enough for a lengthier stay for two people.

No wonder then that people rushed to place orders on it. Once a video presentation of the Retro Trailer went viral, Gidget was able to expand to the U.S. and New Zealand markets – and this was also when the first backlogs appeared. In January 2018, Gidget Australia announced it had gone into voluntary administration, with directors Wills and Bree filing for bankruptcy.

That same year, the Office of Fair Trading took the parties to court, eventually finding both Wills and Gidget in breach of the Australian Consumer Law by taking money for a product they failed to deliver in a timely manner. In total, over 80 customers in both Australia and the U.S. lost more than $1.5 million in unreturned deposits.

The investigation would reveal that Wills had consulted with insolvency attorneys as early as mid-2016, shortly after the aforementioned viral video that sent order numbers through the roof. Yet, he continued to collect downpayments for orders he knew very well they couldn’t complete, with debts to creditors and customers rising up to $3.5 million. Wills and Gidget were ordered to pay fines and restitutions to customers, but not all of them received their money back. Wills, for one, came out of the trial homeless, bankrupt, and in bad health, all of which factored into the sentence.

Today, the Gidget Retro Trailer is only a bad memory for those who lost money on it, and a sad cautionary tale for everyone else. 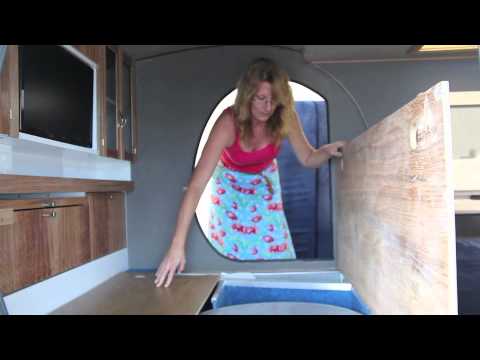