1 Gorgeous, Floating Mega-Mansion Has a Little Something for Everyone

Activists Are Focusing on the Wrong Places to Protest, Using Wrong Methods as Well

The more you plan for and worry about a DIY (do-it-yourself) project, the more likely you’re to become discouraged at the first sign of trouble, or to talk yourself out of doing it before you even start. That’s the personal motto of Jono Williams, which also served to fuel his stunning project The Skysphere.

The Skysphere is the ultimate, futuristic treehouse from New Zealand, not one of the three Audi Sphere concepts. It was completed a few years ago and gained international fame for its striking design and the fact that it was a DIY project, and is still around today. If you were looking for some motivation in terms of sustainable, off-grid, slightly mobile architecture, take this story with your morning cuppa.

The Skysphere is the work of Jono Williams, in every sense of the word. A graphic designer and plastics engineer, he designed it and then built it himself, over the span of three long years that involved, among many other challenges, having to learn to weld. It is a treehouse or a man cave with smart tech, isolated from the rest of the world, with fancy entertainment options and sleeping for two, custom lighting, and the most astounding views you’re likely to get in New Zealand. It can also double as a zombie retreat, FYI, and it has a zombie mode.

Located in Palmerston North, The Skysphere is a sphere in the sky, as you probably guessed. Before he started working on it, Williams built a couple of regular wooden treehouses using mostly reclaimed materials, so he was looking to upgrade on those. He thought of ways to improve a treehouse, and he came up with the plan to build a habitat on top of a steel pole. So he set out to build it, without as much as a pause to think whether he could.
“I have a personal theory,” he told local media in 2015, “that if you sit back and think about how hard something will be, you will just convince yourself it can’t be done. The whole project made me think of climbing a huge set of stairs – each step was a task, and I’d focus on a few steps at a time. Next thing, I was finished.”

Total cost of the project was about $50,000. The Skysphere is 10 meters (32.8 feet) high and sits on a steel pole that’s 1 meter (3.2 feet) in diameter on the inside. The pole is encased in reinforced concrete, but the whole structure is designed to be easily separated from the foundation and carried off to another destination, on a specially designed trailer.

Access is only by fingerprint. Once you climb the set of built-in stairs, you get to the main living space, which is 25 square meters (270 square feet). It houses a bed for two, and a semi-circular couch that offers amazing views to the natural landscape or a great position to watch a movie on the large projector screen. It also has what architect and popular British TV host George Clarke called the most amazing invention ever: a fridge integrated into the armrest, with a voice-activated beer dispenser. In a proper man cave, you shouldn’t have to lift a finger for anything.

Everything is voice-activated or controlled via app inside the habitat: the lights, the screens, the doors, and the beer dispenser. Custom solar strips on the roof structure are more than enough to run all the electronics, so the only thing you still have to worry when you visit, in terms of being fully off-grid, is how much beer you bring with you.

Over the habitat is the viewing platform, which offers the same 360-degree views, but without the now-tinted surround window. Speaking of the window, because The Skysphere sits on top of a hill, at a considerable height, Williams had to ensure it could withstand strong winds. It’s made of polycarbonate, which is more flexible than glass, and runs 14 meters (46 feet) in diameter and 2 meters (6.5 feet) in height.

The Skysphere doesn’t have running water or plumbing, because Williams didn’t imagine it as a permanent residence. When he showcased it for the first time, he kept saying that he could turn it into a full-time home, either by adding a second level underneath the existing one, or by building a shower at the bottom of the steel pole and an outdoor toilet. He also talked about thinking of moving The Skysphere to the seaside, and of wanting to turn it into a production model.

These plans never materialized, for whatever reason. The Skysphere is still at its original location and, by the looks of things, occasionally takes up guests looking to experience a very unique take on alternative and (more) sustainable living. Not too shabby for a DIY. 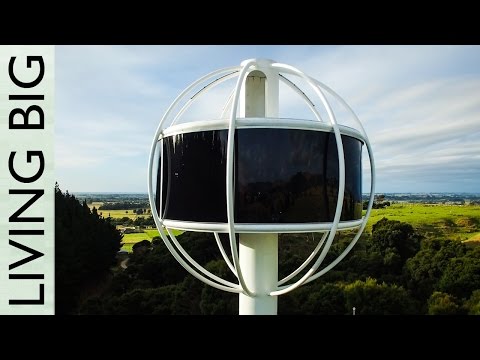