5 Who Needs Flying Cars When You Can Have this Oil Tycoon Chopper Soon?
Car video reviews:
Up Next

O.J. Simpson's Famous Getaway Car Has Been Found, and It's Still Running

In June 1994, 40 million Americans were glued to their TV sets watching what wasn’t exactly a very thrilling police chase in itself, but one that featured the man of the moment.
1 photo
Tucked away in a white 1993 Ford Bronco was none other than O. J. Simpson, the man accused of killing his ex-wife, Nicole Brown, and her friend, Ron Goldman. The former NFL running back was the subject of one of the most publicized trials in the world, but in the end, he was found not guilty and acquitted of the two murder counts.

But before he was arrested, Orenthal James Simpson and his friend, Al Cowlings, led the police on a lengthy, slow-paced chase that featured the now Famous white Ford Bronco SUV. During the pursuit, O.J. Simpson, who was hunkered in between the rear backseat and the front seats, had a gun to his head and threatened to kill himself.

Years after this episode that turned him into an even bigger celebrity than he already was (O.J. did have a prolific career as a football player), Simpson managed to get himself arrested for a series of felonies including armed robbery and kidnapping. He was sentenced to 33 years in prison with a minimum of 9 before parole in 2008, so he can still be found at the Lovelock Correctional Center in Lovelock, Nevada.

But let's get back to June 17, 1994, and the moment the white Bronco became a part of American history. More than 20 years later, the car’s trace was lost, and nobody knew what had come of it. It was natural to suspect it was impounded or, even worse, already scrapped. In reality, though, it was immediately bought by O.J. Simpson’s former manager, Mike Gilbert, together with “some partners,” who kept it to this day.

He put it to conservation in a garage in central California and hasn’t turned its wheels for more than 20 miles since then. Sitting under wraps, the Bronco is in pristine condition, and with the help of some jumper cables, it sparked back to life to take Gilbert and a journalist from Inside Edition for a historic ride.

Mike even has the original license plate that can be seen in the footage of the pursuit, and he says he’s had offers of $300,000 for the car, but refused to sell it. Instead, the Ford Bronco is going to be donated to a crime museum in Tennessee. After all, it is the second most watched car in the world, after JFK’s limousine. 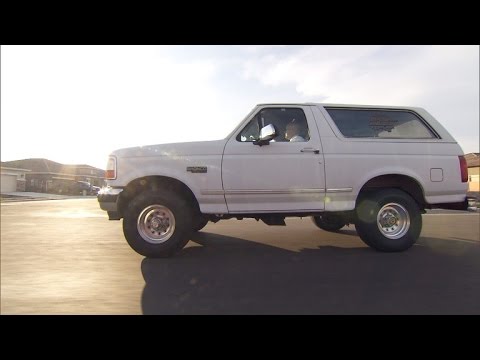