1 eFoiling: Surfing Above the Waves

4 Candela Unveils the P-12 Shuttle, an Electric "Flying" Ferry That Can Hit 30 Knots

5 "World's Most Anticipated Electric Boat" Makes Its Official Debut Next Week
Car video reviews:
Up Next

It doesn't matter what you do; you just have to cycle. Be it rain, snow, or shine, you feel the bicycle is your mobility vehicle. Well, what about taking to the high seas on a bicycle? In today's world, that's possible too.

Come to think of it, vehicles that are operated with a mechanism similar to that of bicycles are nothing new. I used to repair pedal boats and other watercraft 15 years ago, but to consider the Schiller S1-C bike nothing more than a pedal boat is sheer folly.

Folks, Schiller isn't a new company, but because they've managed to stay alive as a supplier of vehicles that extend the boundaries of human travel, sports, and fun, I've decided to bring to light the work they create the S1-C water bikes. Born in Mill Valley, California, this team is no stranger to fun in the sun or being out at sea.

Now let's dive deeper and witness what you can broaden your horizons with for no more than $5,000 (€4,900 at current exchange rates). That's all you'll be dishing out for one of these machines, and frankly, that's a lower price than we're being asked to pay for some terrestrial bicycles; with an S1-C, you'll be able to explore lands like never before, and that's what you're mostly paying for here.

After all, the design isn't very complicated; there are two rafts set up catamaran-style, and in the middle of the action is you, pedaling yourself to safety like you just witnessed some shark fins floating in the local bay. But there's more to this story than meets the eye, so do continue reading.

One of the main uses for this floating stationary bicycle is to help you explore further and faster than what other competitors may have on the market. Because Schiller designs each S1-C with a proprietary drivetrain operated with a Gates Carbon Drive, this bugger can reach speeds upwards of 10 mph (16 kph) on water, which is about 8.7 knots.

You'll see a propeller mounted to the rear of the catamaran to transfer all the power you produce while pedaling into momentum. It's this feature alone that's responsible for helping you cover precious ground and steering. All that's to be controlled by the integrated handlebars. And don't worry much about shallows; it's a retractable feature, allowing you to lift it out of the water.

Which reminds me, because the S1-C is built from multiple separate parts, you can quickly load this up into your RV's garage or mount it to that roof rack on your car or even in the trunk. This could also be a great addition if you own a yacht or other seafaring vehicles.

Beyond simply adventuring and exploring local coastlines, there's a clear benefit to the S1-C: offering you a healthy way of doing so. After all, we're all aware of the health benefits of cycling. Couple that with the smoothness of water as a surface, and say goodbye to aching backs and sore bottoms from bumps in the road. Again, the only things you may need to watch out for are the sharks I mentioned and large waves. Don't worry; I'm sure there's an instruction manual that tells you everything you need to know about the S1-C's limits.

At the end of the day, it's not the vehicle for every occasion, but it does come across as the perfect addition to your summer beach house or lakeside abode. Heck, Schiller's website even shows good ol' Connor McGregor rocking one of these puppies, and we all know that gentleman likes to stay in shape. It sounds like a neat way to do so if you ask me. 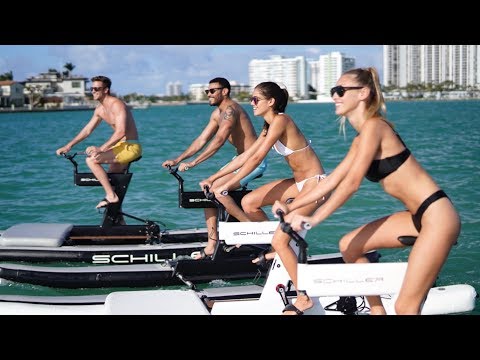