1 Vauxhall VXR220: A GM Mid-Engine Sportscar That Was Arguably More Fun Than a Corvette

2 Five Final Editions That Went Out on Top

If you’re looking to spice up your summer with a gorgeous two-seat roadster but you don’t have the money for a new one like the Mazda MX-5 Miata, you should seriously consider the Saturn Sky Red Line.

Back in the mid-1880s when Japanese imports were taking the American automotive market by storm - particularly in the compact car market, General Motors launched a new brand called Saturn. A few years later, cheap models like the S-Series started rolling out and although they were relatively popular, these cars never rose to the corporation’s expectations in terms of sales. From 2000, the brand expanded its portfolio with the Vue compact SUV or the Aura mid-size sedan, but overall sales didn’t improve. Once the financial crisis of 2008 hit, GM unsuccessfully tried to sell Saturn, and two years later it was dropped.

Before its untimely demise, the brand surprised everyone by releasing the Sky - its first and only sports car. Based on the Kappa platform, it was basically a rebadged and slightly redesigned Pontiac Solstice, a model nominated for the North American Car of the Year and Design of the Year awards by the Automobile Journalists Association of Canada (AJAC).

As was the case with its sibling, the base trim was powered by a 177-hp naturally-aspirated inline-four that made it pretty dull. However, the Red Line version was a different story since it offered more power and a host of exciting upgrades borrowed from the Solstice GXP.

Mechanically, both models are virtually identical, but the exterior design is what sets them apart. Designed by Franz von Holzhausen (who would go on to stylize Tesla’s most popular models), the Solstice and the Sky shared the same general body shapes, yet the latter’s revamped front fascia looked way better. The droopy headlights and the BMW-like kidney grilles from the Pontiac were replaced with sharper, more aggressive headlights, a slim chrome grille, and a vented bumper. In many ways, these elements made the sky look like a baby Corvette, rather than a beaver, which was what the Solstice resembled when viewed from the front.

Like the GXP, the Red Line came with a longitudinally-mounted Ecotec LNF four-cylinder mated to either a five-speed manual or a five-speed automatic. Even if this 2.0-liter seemed puny when compared to the V6 and V8 engines in GM’s portfolio, it was the perfect match for the Kappa platform. Developed using data from racing programs, it employed a forged steel crankshaft, forged steel connecting rods, low-friction cast aluminum pistons with oil squirters, and sodium-filled stainless steel Inconel exhaust valves similar to those used found on the Corvette V8 powertrains. Moreover, the compact and lightweight unit was fitted with a twin-scroll turbocharger that enabled it to deliver just enough power to make the car exciting. In stock form, it was rated at 260 hp and 260 lb-ft (353 Nm) of torque, but from December 2008 onwards, an optional turbo upgrade kit upped those figures to 290 hp and 340 lb-ft (460 Nm).

Apart from the better engine, the Sky Red Line was equipped with a stiffer suspension system and a torque-sensing limited-slip differential, components that helped improve handling.

Introduced in the spring of 2006, it was praised for its outstanding handling, which made it a joy to drive. Unfortunately, the $30,000 ($43,022 today) sticker price made it too expensive during a period of financial uncertainty, so before its demise, Saturn built and sold only about 15,000 units.

By now you’re probably wondering why you should pass on used roadsters such as the MX-5 Miata or even the Solstice GXP and go for a Sky Red Line? Well, apart from being a terrific driver’s car, it’s arguably one of the greatest GM sports cars of the 2000s, it looks amazing, and it’s rarer than the aforementioned models.

An example in great shape, with decent mileage, can be had for under $15,000. For that, you get a thoroughbred, American-made roadster that will not only put a wide grin on your face every time you drive it but might also prove to be a great investment. Considering that not many of them were built and it went down as the best vehicle to ever don Saturn badges, the Red Line is bound to become highly collectible in the future.

If you’re still not convinced, I recommend watching the YouTube video below by The Dutch Texan. By the time it ends, you’ll understand why buying one of these terrific roadsters is a no-brainer. 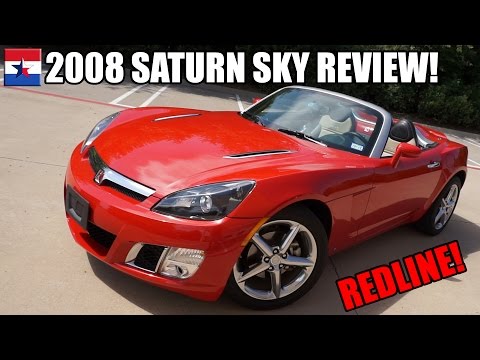