1 BMW S65: The M3’s First and Only V8, and Five-Time International Engine of the Year Winner

3 Remembering the 1,350-HP Turbocharged Four-Cylinder Built by BMW During the 1980s

The only series production V10 ever developed by the Bavarians, this brilliant powerplant was inspired by one of the most epic engine configurations in the history of Formula 1.

For the 1995 F1 season, the Fédération Internationale de l'Automobile (FIA) introduced a new set of rules that limited engine displacement to 3.0 liters. Manufacturers were free to use V8 or V12 units, but it was quickly evident that the best power-to-weight ratio was being produced by V10s. Naturally aspirated, these powerplants were able to rev up to a whopping 20,000 rpm and comfortably spit out over 800 hp - all while delivering a deafening, high-pitched sound. This wonderful era dominated by Michael Schumacher and Ferrari ended in 2005 when 2.4-liter V8s were imposed.

In 2000, just a year after winning the 24 Hours of Le Mans, BMW made its Formula 1 comeback as an engine supplier for Sir Frank Williams’ team. This collaboration would last for the next five seasons, and although it didn’t yield any trophies, it inspired the Motorsport division’s only road-legal V10.

During the mid-2000s the division was also working on high-performance versions of the new E60 5 Series and the revived 6 Series, codenamed E63. Rather than taking an existing BMW engine and beefing it up – as they had done in the past with all other M-badged models – the engineers decided to create one from scratch by using the lessons learned during the development of the E41 and P80 Formula 1 units.

Dubbed S85B50 (or S85, for short), the spectacular new engine became BMW’s first production V10. It was built around a lightweight, yet rugged block with bed a plate design split at the crankshaft axis, all fabricated out of eutectic aluminum and silicon alloy by the company’s Landshut foundry. Back then, this facility used the same materials and construction methods to manufacture the blocks for the P-series F1 powerplants.

Inside, a forged steel crankshaft with counterweights and shared crankpins produced an uneven 1-6-5-10-2-7-3-8-4-9 firing order at 90- or 54-degree intervals. Connected to the crank via lightweight magnesium-steel conrods were ten oil-cooled, cast-aluminum pistons.

Equipped with electronically actuated individual throttle bodies and a Siemens MS S85 engine control unit (ECU), it was capable of 500 hp at 7,750 rpm and a peak torque of 384 lb-ft (520 Nm) at 6,100 rpm. The V10 redlined at 8,250 rpm, and with an ideal output of 100 hp per liter, it was (and still is) one of the most powerful naturally aspirated engines ever fitted into a production car. But, apart from the impressive performance figures, the S85 delivered a goosebump-inducing exhaust note that sounded like what one would hear at a Formula 1 Grand Prix.

A few months after the M5’s production kicked off, BMW M showcased the new M6, available in a coupe and convertible body styles. Based on a shortened version of the E60 chassis, the grand tourer was the carmaker’s second model to feature the S85.

In addition to the two BMW M cars, the S85 also powered two lesser-known, but pretty impressive machines. One was the Wiesmann GT MF5 that used a 600-hp version, while the second was a bonified supercar called Veritas RS III where the unit was pushed close to the 650 hp mark.

While BMW’s Formula 1 V10s were known for being very reliable, this didn’t quite translate to the S85. Throughout the years, owners encountered several issues, mainly with the throttle actuators and rod bearings which tended to fail prematurely. However, improved aftermarket replacements that solved these issues became available and, with regular maintenance, the engine became more dependable than initially thought.

Speaking of aftermarket components, the M-developed V10 benefits from a pretty varied list of tuning hardware, including a supercharger kit that can be used to boost power upwards of 700 hp.

Although it wasn’t perfect, BMW M’s only production V10 was unquestionably one of the division’s most impressive engines and the best-sounding of them all, as you can hear in the YouTube video below by Gumbal. The unit won multiple International Engine of the Year awards, including Best New Engine (2005), Best Performance Engine (2005-2007), and Best Above 4.0 Liters (2005-2008). 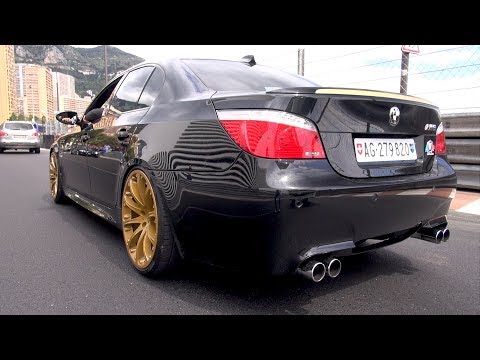