1 Faster Than a Ferrari F40, the Original 1987 RUF CTR Was the Ultimate Supercar Killer

5 Widebody Ruf CTR2 Has Aero Arches, Looks Like a Snake
Car video reviews:
Up Next

Let’s hear it for entrepreneurs, those visionaries who reject the status quo in order to change the world. Alois Ruf and his family have been doing so for decades, and their latest work represents all that is right with air cooled adventure.

The Porsche 911 was, and is a life goal for many of us. But by the mid 80’s, the ancient chassis and tired styling were still mostly unchanged since the early 60’s. Alois Ruf Jr. had inherited his father’s coachbuilding and engineering business that solved problems the big automakers didn’t have time for. As such, it allowed him to enjoy and improve upon the 911 aftermarket.

What he discovered, is that a few suppliers played off of each other in terms of quality and innovation, leaving the world ripe for something new. Starting where it counts, his 3.2-liter stroker debuted in 1977, overpowering the emissions junk found on every Disco-era performance car. This caught the attention of Porsche, who made an unprecedented move to supply him with bare 911 bodies. Essentially a blank canvas, Ruf unveiled the first CTR in 1987.

The acronym stands for Group C, Turbo, Ruf, so don’t call it a Porsche! The engineering basis for every component so impressed the German government that RUF Auto was given manufacturer status. That means each car has a RUF VIN, registration, and build sheet from their headquarters in Pfaffenhausen. Although they resemble a production Porsche, Plato would likely describe them as Simulacra instead of Simulation.

It is easy to see how the first CTR “Yellowbirds” inspired Porsche to update their lineup, with the 964 arriving in ‘89. Since then, Ruf and his family have built the ultimate examples of the Boxster and Cayman without diluting their core product. To show us in person, this anniversary edition was unveiled at the 87th Geneva Auto Show before being on display at The Amelia this year.

While lesser builders must start with a vintage 911, this car combines the best attributes of all air-cooled cars into a new carbon fiber monocoque. Alois said “I really thought about the concept for the CTR Anniversary for a long, long time”. His goals began with torsional rigidity and weight, and that that translated into a comfortable coupe with confidence in the corners. The carbon fiber would make for a great unibody car by itself, but he demanded the best.

Therefore, the front and rear subframes are fabricated by hand, comprised of thick-wall DOM steel. Welded and gusseted into the roll cage, the CTR Anniversary is twice as strong as it needs to be while offering a curb weight of 1,250 kg (2,775 lbs). Having 710 horsepower and a 7-speed manual would be enough for most, but it also offers 880 Nm (649 lb-ft) of torque between 2,750 and 4,000. This torque to weight ratio outshines McLaren, Koenigsegg, and probably the Budweiser Rocket also.

The real boss of the company is his wife Estonia, who ensures the aesthetics of each build are perfect. Details like the interior fabrics, panel fittings and, and ergonomics must pass her keen eye for detail. That’s why Easter Eggs like the family logo along with nods to their past are hidden in plain sight. Other details are just as impressive, like finding room for an inboard suspension. All four corners have their own coil-overs mounted low on the frame rails. Thanks to push rods, the shock mounts are in-line with the frame, to transmit compression and tension in the same direction as the chassis members.

Seeing a Ruf in person is motivation alone to acquire the means necessary to eventually own one, and this sentiment is shared by Porsche owners and us common folk alike. Tell us your wildest 911 experience in the comments and stay with us for more air-cooled classics. 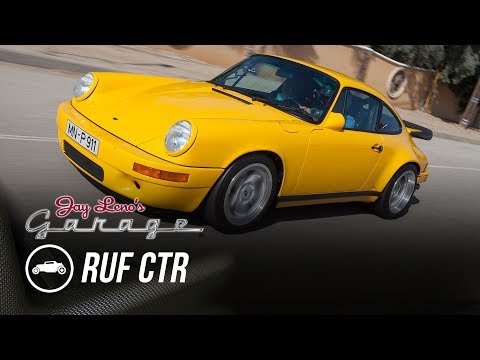