3 Feeding Friendships Is a Brazilian Campaign that Counter-Fights Facebook

It would appear that in parallel to the automotive industry’s stabs at autonomous driving, more and more companies are interested in developing an automated public transport system.
1 photo
If you’re just beginning your career as a bus driver, tough luck, the future doesn’t look very bright for you. The emphasis today seems to be on coming up with public transport solutions that don’t require the presence of a human to operate the vehicle. What’s wrong with humans? Well, they cost money, for one thing, and they also commit mistakes. And sometimes, they smell.

Joking aside, we were telling you earlier today about a project called GATEway that was currently under development in London. The British effort is expected to begin public tests this summer, even though it still has a few hurdles to jump.

The Dutch aren’t lagging behind - in fact, they’re one step ahead, having already begun tests for a six-person automated vehicle called the WEpod. The driverless vehicle has an automated door, seating for six and a lift that can welcome aboard people in wheelchairs as well.

The emphasis is now on acquiring as much information as possible regarding human behavior, insurance, liability, road management, design and any other feature related to the way the autonomous pod interacts with its occupants and its surroundings. For the moment, the odd-looking WEpod - not very different to a Nissan Cube - is strolling along a predefined route on public roads, while some people in a backroom are constantly monitoring its progress.

That’s one of the main advantages these transport solutions have over the standard autonomous personal car: they can have an extremely detailed route uploaded into their system, and so they don’t need to bother about the rest of the road network. Of course, they still need to make real-time decisions regarding traffic, but knowing exactly where they are thanks to a number of fixed landmarks along the way does simplify things greatly.

If this first testing phase proves successful, the WEpod’s route will be extended to include areas outside of the Wageningen University campus, including the Ede-Wageningen intercity railway station. The WEpods are currently testing the route, with public demonstrations scheduled between May and July this year.

These initiatives don’t just aim at taking the bus driver out of the equation; when they are finally up and running, they will also change public transportation as we know it. Gone are the large-capacity vehicles and in come these versatile pods that can change routes on the fly, are more adaptable, and look like they’re better suited for urban traffic. In a few years from now, this is how you might be getting to work, and not just in Holland or the UK. 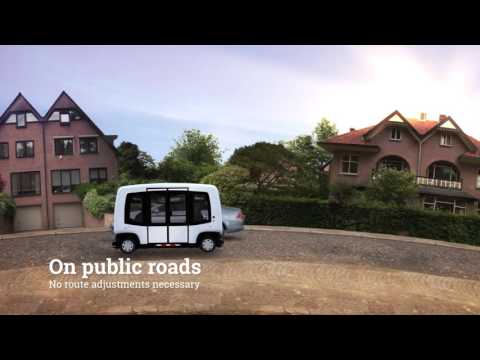