Still, even though the BMW’s “CSL” initials stand for “Competition, Sport, Lightweight,” the car didn’t quite live up to that in practice, proving no match for the Porsche from a standstill. The BMW's launch control was to blame, avoiding wheel spin but holding the car back at the starting line.

While the M4 CSL picked up speed later on, it wasn’t enough to catch on to the Porsche. Not the first time, not the second, and neither the nth time had Mat and Yianni had another go at it.

As for a rolling start from 50 mph (80 km/h), the Porsche still came out victorious, even though the M4 did a lot better this time.

However, things were about to take a turn for the worse…for the Porsche, that is. As soon as the guys switched to manual mode, the difference was light and day! Thanks to the extra power and torque, combined with some proper gear shifting, the BMW was gunning towards the finish line, leaving the Porsche in the dust.

From then on, the Bimmer kept winning (except for the brake test), even when lowering the starting speed to 40 mph (64 km/h). The guys had fun, that’s for sure, and even came up with new nicknames for each other… 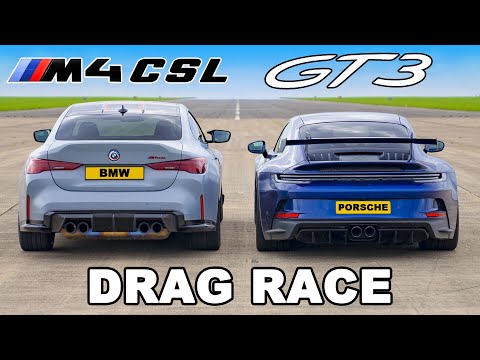