What Car Would You Buy if You Were a Star?
The Roman supreme pontiffs have a long history of being driven around in bespoke carriages, specially designed coaches and custom made cars. Of all the car manufacturers who at one point have supplied the Pope with a vehicle, Mercedes-Benz stands out as the one brand which actually became known as a supplier of Popemobiles over the last seven decades. 1930 - Nurburg 460 Pullman

The Popemobile: a History of Holy Benzes

The Mercedes-Benz Nurburg 460 was launched in 1928 and was the flagship limousine from Daimler-Benz at the time. It rapidly became a no-brainer that when the engineers and designers had to choose a Mercedes-Benz to be custom built for Pope Pius XI, the Nurburg became their first and only choice. The W08 limousine was powered by an inline eight-cylinder engine with a total displacement of 4622 cc. The 80 hp at the diesel-like 3400 rpm it developed were more than enough to propel the humongous behemoth to 100 km/h (62 mph). Internally codenamed the “Rome Vehicle”, the project become one of the top priorities at the in house Pullman coachbuilders of Mercedes-Benz.

Unlike the first W08s built in 1928, which had “oldschool” high frames, the pontiff Pullman benefited from a more modern low frame. The chassis, power unit and bodywork were modified to very little extent, since the regular model was more than appropriate for the Pope's wishes and needs. The interior on the other hand was hand converted to almost every respect, since almost every man involved realized the special significance of the project. The car was manufactured at the Mercedes-Benz Mannheim plant and then converted and furnished in Sindelfingen.

Initially planned to be delivered in the winter of 1929, it soon became obvious to everyone that that was to prove impossible. The special black livery, the single rear throne-like seat with air-cushion upholstery and other outstanding details took time to be manufactured and/or added to the car. The two front seats were covered in black leather, while the Holy Father's throne was engulfed in fine silk. The interior roof lining had a unique dove motif, symbolizing the Holy Spirit, which was specially designed by Father Cornelius, an expert embroiderer from the Benedictine order of the Beuron monastery. 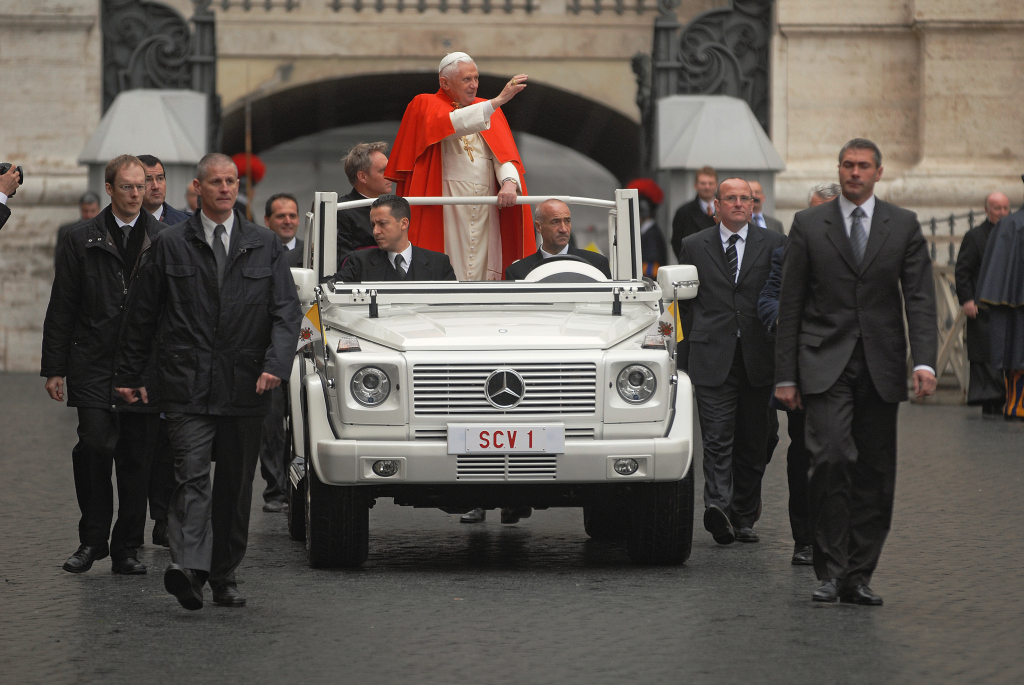 The car's windows were originally planned to be manufactured out of “select crystal mirror glass", but a modern Kinon safety glass was used instead. Kinon was an early laminated glazing glass, which consisted of two glass panels with sheeting in between, just like the much more modern “duplex” windshield. Also a groundbreaking feature and never before seen on a car until then was the Pope's “control panel” in the rear, with which the pontiff could signal the driver instructions about the desired speed or even destination.

The car was finally completed in the spring of 1930 and it was first presented in Vienna and Stuttgart before being sent to Italy. Interestingly, the first Mercedes-Benz Popemobile wasn't sent via another transporting vehicle to the Vatican, but was driven instead. After a careful inspection of the vehicle, Pope Pius XI went for somewhat of a joyride through the Vatican gardens. “A wonderwork of modern engineering,” he enthused when climbing out of the first ever automobile to be regularly used by a pontiff.
1960 - 300 d Landaulet
Three decades after Mercedes-Benz's first Popemobile was delivered to the Vatican, the Germans presented the new Pope with a modern car. Handed in the winter of 1960 to Pope John XXIII, the 450 millimeter extended wheelbase 300 d W189 was modified with a Laundalet bodywork. The 5.6 meter long car was powered by an inline six-cylinder engine delivering no less than 160 hp transmitted via a three-speed automatic transmission. Its top speed was 160 km/h (99 mp) but we believe the car in question never achieved those kind of numbers after being retrofitted for the Holy Father. 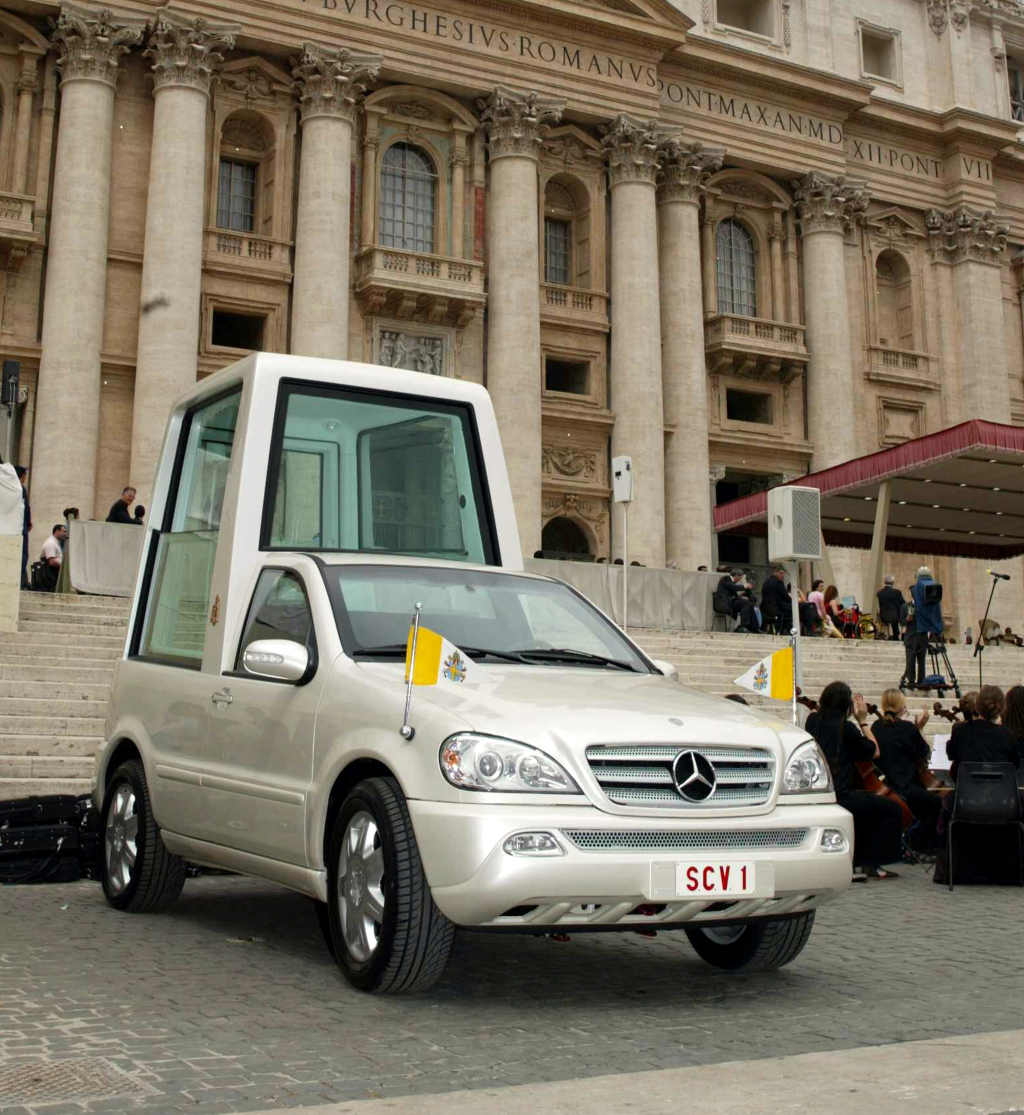 The side rear windows could be removed when the soft-top gave view to the clear sky, while the partition window between the driver and the rear-passenger compartments was electrically operated, just like the front side windows. Similar to what you'd expect from a knighted James Bond vehicle, running boards were automatically extended from under the car when the rear doors were opened. Just like in the original Popemobile, the rear seat was in fact a throne-chair but this time was accompanied by two folding seats for the Pope's escorts to sit on during longer travels.

The “control in the rear” tradition started by the first car was improved with air conditioning, two-way radio controls and other similar amenities. The throne-seat itself was electrically adjustable and wasn't that much different than the seats found in a modern Maybach 62 from the comfort point of view.
1965 - 600 Pullman Laundalet
After the first Mercedes-Benz Popemobiles served several Popes, Paul VI received what was then one of the (if not THE) best limousines on the planet in 1965. The 600 Pullman Laundalet was created in a cooperative effort by all the Sindelfingen-based Mercedes-Benz test and production departments. Built on the V100 platform, the new Rome Vehicle had a 3900 millimeter wheelbase, 256 millimeters wider rear doors, 70 millimeters higher roof and a soft-top roof for the rear. The vehicle's special features included a cooling system, two-way radio for communication with the driver and an electrically single throne-seat in the rear. Almost all the car's adjustable features were controlled by a hydraulic system.
1967 - 300 SEL Pullman
Two Pullman W109-based limousines from the 300 SEL series were delivered to the Vatican in the spring of 1967. Both vehicles were 650 millimeters longer than the production versions to give plenty of room for the up to six passengers to be seated inside. Unlike the previous Popemobiles, the twin limos weren't used by the Pope on official occasions but as a means of comfortable transport for the high-ranking guests to visit the Vatican.
1980 - 230 G-Klasse
The W460 G-Klasse painted with “mother-of-pearl” livery that was delivered to Pope John Paul II is probably the most famous Popemobile in history. Initially given on loan for the Pope's visit to Germany in 1980, the car suffered a series of transformations which made it the most prodigious vehicle of the Vatican. The reinforced plastic cupola was designed to be removable in fine weather but after the attempt on the Pope's life in 1981 it became firmly placed on the car for security reasons, transforming into an aquarium-like structure.

An automatic climate control system for the rear space of the 230 G kept the air quality in check for the Pope and prevented the cupola from misting up during bad weather. Small spotlights were integrated into the interior to make him visible in the dark, while an army of extra batteries were added underneath the car to feed the upgraded electrical system. This was also the first Popemobile not to be painted in black, but in “mother-of-pearl” white and gold livery, the Pope's colors. The interior was also engulfed in white wool velour and leather. The glass safety cupola in the rear became a detail to be used on almost every other Vatican vehicle ever since.
1985 - 500 SEL 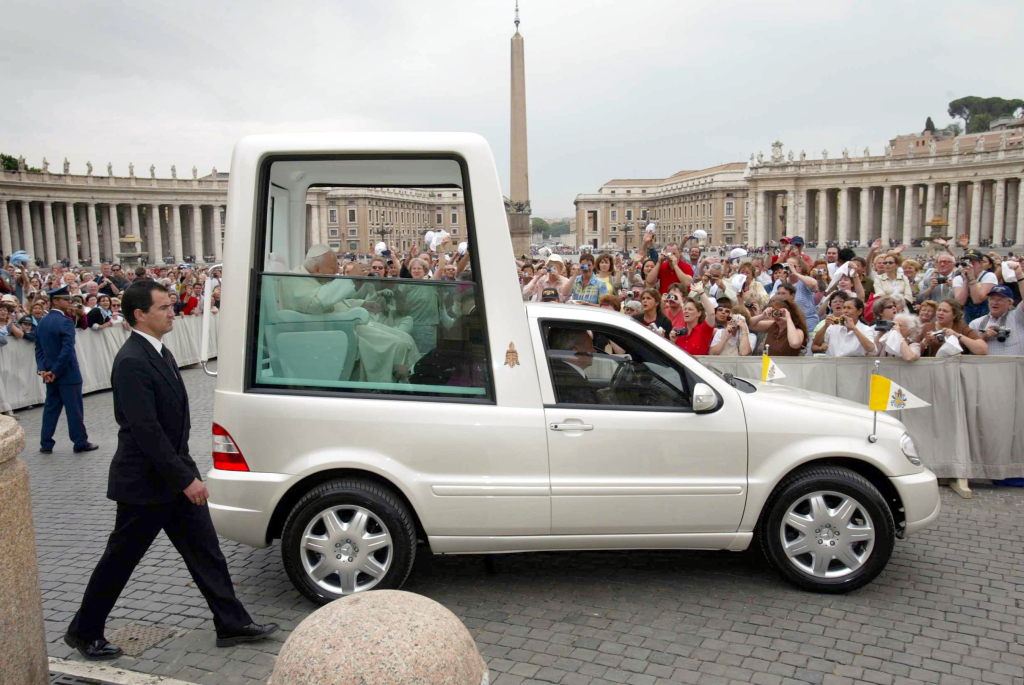 Apart from the international media outings in the 230 G-Klasse, John Paul II continued the tradition of using classic limousines or laundalets in his other endeavors. In the summer of 1985 he was given an armored Mercedes-Benz 500 SEL W126 as a present. The vehicle had a 200 millimeter longer wheelbase and a 30 millimeter higher roof. In the rear, preserving the tradition, the Pope had a single seat but the car was also fitted with two folding seats facing rearwards for bodyguards. Despite weighing almost three tonnes because of the armoring, the car had a top speed of over 160 km/h (99 mph). After the election of Pope Benedict XVI, he was seen in his first official endeavors in Rome in this very same car.
1997 - S 500 Laundalet
Handed to the Vatican in 1997, the W140-based S 500 Laundalet had an electro-hydraulically operated soft-top for the rear, where the ever-present electrically adjustable throne-chair was based. Mercedes-Benz engineers gave the seat a vertical adjustment travel of half a meter, so that the Pope could be seen better by audiences. Fitted with a 320 hp five-liter V8 transmitting power via a five-speed automatic transmission, the heavy car had more than adequate performance. A high-performance communication system and a Saint Mary icon integrated in the paneling made the laundalet car even more unique.
2002 - ML 430
The W163-based ML 430 was delivered to Pope John Paul II in 2002, just months before he visited Canada for the World Youth Day. Similar to the original 230 G, the new Popemobile was also fitted with a cupola made of advanced plastic. With a V8 engine outputting 272 hp, the new Rome Vehicle was powerful enough for the Pope's requirements. Just like its G-Klasse predecessor, the car was given a “mother-of-pearl” and gold livery and white leather upholstery.
2007 - G 500
The latest Mercedes-Benz vehicle destined for the Pope is a “Vatican mystic white” G 500, which was delivered at the end of 2007. Even though the convertible G-Klasse can be used by Pope Benedict XVI to visit the world's most remote countries, its main purpose is to present him to the tens of thousands of pilgrims who flock Saint Peter's Square in the Vatican every Wednesday. The vehicle took over two years to complete and it was modified following a close consultation with the Pope. Unlike the ML 430, this new popemobile has a folding windshield and can be completely transformed into a convertible.