2 Rapper Future Splashes $16.3M on Miami Mansion With 3-Car Garage and Space for a Yacht

4 Gorgeous, Floating Mega-Mansion Has a Little Something for Everyone

Neither Mud, nor Snow, nor Sand Is Going to Stop Kia's New Sportage Concepts

The Perdu Home Lies 13 Feet Underground, Has a Custom Car Showroom and Is Gorgeous

Elena Gorgan
What do you do when you have ideas and the money for a new exciting development project, but you’re told that you will never get the permits to build on that land? You go underground, of course.
23 photos

Bunkers and all manners of underground structures, whether fancy wine cellars or basements and storage rooms, might be a cool “get,” but they’re not exactly very inviting as permanent residences. The Perdu is the exception: a most luxurious and elegant home with three bedrooms and various entertaining options, which just so happens to lie 13 feet (4 meters) underground.

We covered the Perdu on a previous occasion, but a new video tour offers a much better appreciation of it, which, in turn, warrants a follow-up. This home isn’t just a gorgeous one-off piece of real estate that could fulfill the potential James Bond dreams of a very rich man (or woman), but also an intelligent use of space, down to the way in which one way to get inside it is by car.

Perdu is described as an “entertaining home” in Bowdon, Greater Manchester, UK. It is a project by developer Huntsmere, with director Chris Oakes owning the land it sits on since 1999. The lot is actually part of a larger one on which there’s an old, traditional house that Oakes converted into apartments, he explains in the video tour for Kirsten Dirksen for her popular YouTube channel. He wanted to build another house on the smaller “leftover” loft, but was told he’d never get the permits for it.

“It was quite key words,” Oakes says of his interaction with the council, as you’ll see in the video below. “You'll never get planning for any house here which takes away the view from the street of the main house. Conservation area, period house, you won't get it.”

So, in order to not take away the view to the main house, he went underground for the new one. The result is a three-bedroom 4,000 square-foot (372 square-meter) “entertaining house” that includes a lot of natural light, a couple of private terraces, the garden on top, a pavilion, and the only above-ground structure that’s been fashioned into a games room.

Contrary to what Oakes told the media before, the only way inside the house is not through the garage, which he described as a custom car showroom. There are three entrances, including the one by car lift, which means that you can drive directly into the house – or a section of it, at least. The other two are through the games room, and down the stairs and onto the private terrace that holds the jacuzzi and outdoor barbecue.

The Perdu has drawn comparisons to a bunker, comparisons that Oakes himself invites – and makes during the tour. He also says that, in case of a zombie invasion, this house is not the worst place to be. It’s not the best, either, since there are at least two sure ways in which the zombies can get in without needing brains to think or to guess which buttons on the car lift to press.

That aside, the estate is impressive. As you drive into what looks like a very narrow parking spot behind an automated gate, you’re on top of a car lift. Press a button and you’re dropped into the house. Another door will open and you can drive inside the space that Oakes once described as the car showroom. It’s not shown in the video, but he clearly calls it that because the car remains visible from the second sliding door, which is made of glass. In other words, you’d be inside your lounge sipping coffee and admiring the beautiful machine behind the glazing.

Speaking of which, Oakes says the Perdu uses walk-on glazing for the four large skylights that offer plenty of natural light, three in the bedrooms and one over the living area. Even more natural light flows in from the private terraces and is complemented by recessed lighting throughout the house. For an underground residence, you don’t get the feeling you’re underground.

Besides the jacuzzi, the outdoor BBQ, the garden pavilion and the games room, the Perdu also has a DJ booth and bar inside the living room, and proper kitchen facilities. It is designed as a place for entertaining in the utmost privacy, and it’s ready to do just that for whoever has £4 million (approximately $4.6 at the current exchange rate) to splurge on a secondary house for entertaining only. 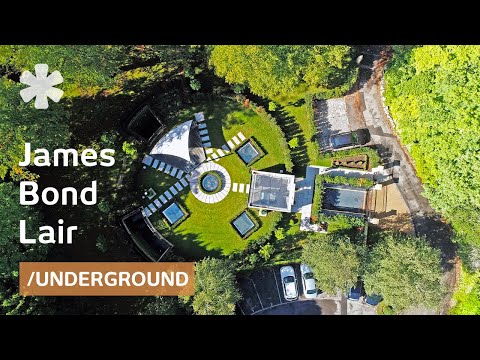