4 Meet Solid CRS-01, the E-Bike Concept That Looks Like It's About To Snap Your Fingers Off

The option of ditching the ICE car and choosing a greener, more efficient means of transport like a bicycle is really no option at all for those who work in services or delivery. But the ONO could be the electric vehicle that turns it into a reality.

The ONO is the creation of Berlin-based startup ONOMOTION, which believes that greener transportation doesn’t have to be limited in focus to personal mobility only. Delivery and service vehicles, which are mostly vans, could use an upgrade, one that would cut down the total amount of emissions and the congestion rate in the cities, as well as improve delivery times and costs for the fleet operator.

Such an upgrade would be an entirely new kind of vehicle, ONOMOTION says: the ONO. Technically, such a vehicle isn’t new. Most readers past a certain age will probably remember the old-school three-wheelers that were used to deliver milk or the newspaper, or the mail. The difference is that this one is a pedelec, so technically a bicycle that doesn’t require a driver’s license to operate, and that is fully electric.

“The goal was an entirely new vehicle category: the e-cargo bike ONO for sustainable urban goods traffic,” ONOMOTION says. “A hybrid between an electric bike and a car. It allows faster and more efficient movement, saves space, protects the environment and saves resources.”

The company was founded in 2016, and the switch to focusing on a city cargo e-bike happened one year later. Today, they’re offering several pilot projects in Europe, with the ONO at their core, but the option to personalize the vehicles or spec them according to the needs of the operator.

The ONO, put simply, is part cargo e-bike and part microcar, and its goal is to serve as a downsized delivery van. Whether hauling frozen goods, flowers or even furniture, it’s designed to be operated both on cycle paths or in the street, though the latter is not advised given the fact that you can operate it without a license and that you’d be riding around with hefty cargo, at comparatively slower speeds than passenger cars.

Speaking of cargo, it can be transported in the patented container, which can be built-in or attachable, with a maximum payload of 200 kg (441 pounds). Switching between containers is a single-person job, by means of the integrated rear ramp. With the cargo module at the rear, the ONO is 340 cm long, 116 cm wide and 250 cm high (11.2 x 3.8 x 8.2 feet).

One of the most attractive selling points of the ONO is that it comes with an enclosed cabin that offers protection from the elements year-round, which definitely can’t be said about regular bicycles or e-bikes. That said, it’s also smaller than a car and, because it can fit on a bicycle path, it can override traffic jams and guarantee faster delivery times.

Power comes from two-wheel hub motors that deliver 113 Nm of torque and are electronically limited to current EU standards: 25 kph (15.5 mph) motor assistance while pedaling, and a torque button for start-up assistance without pedaling up to a speed of 6 kph (3.7 mph).

The battery is of a 1.4 kWh capacity, and good for 30 km (18.6 miles) of range on a single charge, which is ridiculous for a delivery vehicle. ONOMOTION offers the possibility of bundling two batteries per vehicle for double the range, and has partnered with Swobbee for battery swapping stations, which does away with the need to pull over for at least a couple of hours to recharge.

Other features include an automatic locking mechanism, GPS tracking and mobile data transmission, and RFID chip operation. The ONO comes with the container and full servicing, and optional customization, with pricing starting at €589 ($616) per month over a period of 48 months, and qualifies for €2,500 ($2,613) funding by the Federal Ministry for the Environment (BAFA). 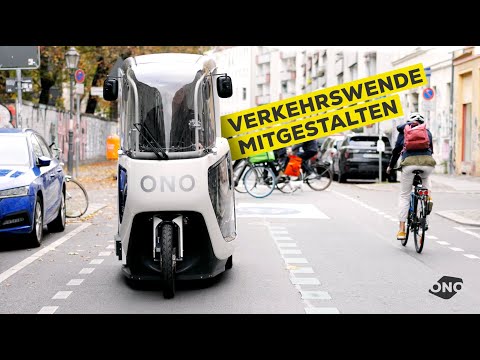