Ancuta Iosub
Thousands of people strolled the streets of Alexandria, Virginia, on Sunday, May 22, to check out a collection of rare classic cars from all over the world. Ferraris, Lamborghinis, Porsches and Jaguars met up and shone bright at the Old Town Festival of Speed & Style that took place over the weekend.
19 photos

Visitors were able to admire more than 100 rare, exotic and unusual supercars. Among the vehicles on display at the festival, participants could spot classic grand touring sports and racing cars from the 1950s through the 1980s, some vintage motorcycles, as well as modern-day models rarely seen in public.

A 1963 Devin S Roadster , a 1953 Morgan, a Lotus 33, a 1950 Jaguar XK120 Roadster, a 1956 Austin-Healey 100 BN2 and a 1961 Nash Metropolitan are just a few examples of the rare cars present in Alexandria on Sunday. You can check out some of the supercars visitors could admire at the festival in the photo gallery above.

Supercars and fashion have long been fast friends, so it is not unusual to see models dressed up to match the style and elegance of cars.The "style" element of the festival was celebrated the night before at the charitable King Street High-Octane Ball and by way of a fashion demonstration presented by celebrity stylist Monte Durham, who is best known for participating in some seasons on "Say Yes to the Dress – Atlanta."

The Old Town Festival of Speed & Style is a nonprofit organization whose aim is to raise funds for charitable organizations. It was created by Rick Myllenbeck, a local restaurant owner. Proceeds from this year’s edition will too benefit several Alexandria-based charities and non-profits, such as ALIVE!, and the Campagna Center.

This was the third edition of the annual Old Town Festival of Speed & Style and was sponsored by Burke & Herbert Bank.

It was a Sunday well spent for the more than 10,000 visitors, many of whom are already counting the days until next year’s festival. 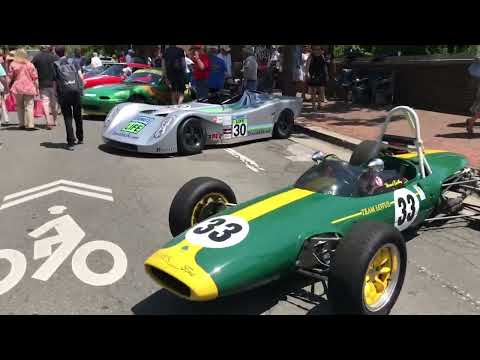