1 These Are the Cities with the Most Aggressive Drivers

2 You Don’t Need 4 Wheels to Drive a Yukon, but Stopping at the Lights Is a Must

The Old Cyclists vs. Drivers Feud Is Taken Up a Notch, No Winners Still

It doesn’t do to generalize, but there’s no denying that cyclists and drivers often don’t see eye to eye. The “feud” between the two groups has been around for years and will live on for the foreseeable future, getting worse with time.
6 photos

At least that’s what a recent incident seems to indicate. It happened on December 29 in Manhattan, New York City, at the intersection of East 21st Street and Fifth Avenue in the Flatiron District, and, as usual, there were no winners. Police are still looking for the cyclists responsible for it, and have apprehended just one of them at the time of press.

Videos of the incident were posted to social media right away and went viral in the days following. You can see a collage of them in the embeds at the bottom of the page.

The incident involved a 2019 BMW X5 with Max Torgovnick at the wheel and his mother in the passenger seat. Torgovnick spoke both to ABC News and the NY Daily News, saying he was driving slowly when he saw the group of mostly BMX riders approaching from behind, so he braked to let them pass. That’s when he heard a thud: he had no idea where it came from but assumed someone must have banged with their hand on the car.

In reality, according to eyewitnesses, one of the cyclists had slammed into the back of the SUV. He had grabbed hold of the car for a free ride, and it braking led him to hit the vehicle, causing a bloody lip. That’s when his mates all stopped and turned his anger toward the BMW.

As you can see in the videos, they kicked and punched the now-stationary vehicle, body-slammed, and jumped on it. They also used their bikes to cause further damage, with one guy clearly seen picking his bike up and slamming it onto the hood. Another cyclist jumped on the windshield, cracking it.

Meanwhile, Torgovnick and his mother, now on the phone with the police, assumed the worst was yet to come. Torgovnick says he took advantage of a small space in the swarm of cyclists to slowly drive away and, to his luck, they didn’t follow him. By the time police arrived, the group had left.

They had started out the ride looking for trouble, according to the police. Before attacking the BMW, they had damaged a taxi with the driver also inside. When the guy came out to confront them, one of them used his two-wheeler to hit him, luckily causing minor injuries.

If you’re a cyclist, you most definitely have stories about rude and reckless drivers who almost ran you off the road or otherwise endangered your life. Similarly, if you’re a driver, you too have an anecdote or two about spanx-wearing dudes and dudettes who think they own the road or are above traffic regulations. Whichever side of the fence you’re on, behavior of the kind displayed below is never the solution.


Here are additional photos of the individuals.

All calls are anonymous. pic.twitter.com/pCKNcMS55S 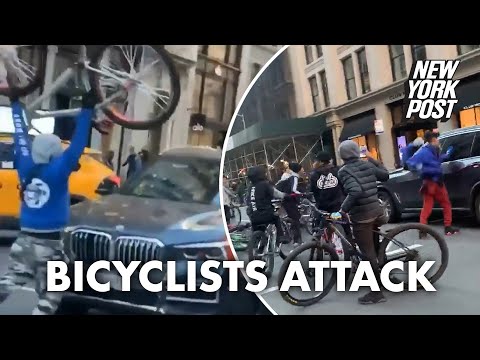