1 Robot Waiters Can Be Fun, but They Have Some Serious Issues With Interaction

Delivery robots are no longer a strange sight in many communities, but the makers of these cargo bots will have you believe in a future in which they will become a fixture in all neighborhoods, without exception. Nuro is one of them.

The Nuro Cargo Bot Wants to Be Part of Your Family, Is the First AV Produced at Scale

The U.S.-based startup has been testing autonomous, electric delivery robots for almost a decade, and it’s made great progress along the way. Nuro has two generations of bots, the R1 and the R2, both of which trialed successfully in limited areas. The Nuro, as the third-gen robot is called, will aim for nationwide and, hopefully, internationally adoption.

A video presentation of the Nuro is available at the bottom of the page. The founders of Nuro also detail the new model in a lengthy Medium post, but the gist is that this is the refined and improved, safer and more efficient model of the three. Consider the R1 and the R2 the stepping stones for the Nuro, which, this way, is able to gun for the title of the first autonomous vehicle (AV) to be produced at scale.

The Nuro is about 20% smaller than an average passenger car but, at the same time, it has double the cargo capacity of its predecessor, the R2. It has two compartments totaling 27 cubic feet (765 liters), or enough storage for 24 bags of groceries weighing up to 500 pounds (227 kg). The Nuro isn’t made for single deliveries, which makes it more efficient.

The modular storage inserts allow Nuro to carry a variety of items, from fresh produce to frozen goods, and hot pizza. It helps that each compartment can be cooled or heated at will, with temperatures going as high as 116° F (46.7° C), or as low as 22° F (-5.6° C).

The founders of Nuro place a lot of emphasis on the fact that Nuro the bot is designed to be a part of the community it helps cater for. Its smaller footprint should give more room to cyclists and pedestrians, while its decidedly cute appearance will make it noticeable right away. It is fully electric and fully autonomous, which means it will help cut down emissions and, if not ease congestion in big cities, at least do its part to not contribute to it.

Speaking of being an AV, the Nuro comes with a suite of cameras and sensors that offer it a 360-degree view of the surrounding environment. Since deliveries don’t stop on a rainy day, or in bad weather in particular, the third-gen bot comes with self-cleaning capabilities for the sensors and cameras, which will help with maintaining operations and retaining sensitivity throughout the day. Nuro says the bot will be functional in all weather scenarios and geographies, which probably means a thin layer of snow won’t see a bunch of them stranded on the sidewalk.

Safety was another important aspect the team at Nuro focused on in developing the bot. “We engineer defensive and detection mechanisms into the system for early warning about potential attacks and ensure our safety margin is maintained in every conceivable scenario,” Nuro says in the presentation. As for real-world, physical scenarios, the Nuro comes with a frontal airbag that would cushion an impact with a pedestrian or a cyclist.

With a top speed of 45 mph (72.4 kph), the Nuro will use we’re using 100% renewable electricity from wind farms in Texas and ethically-sourced or sustainable materials, in what the team says is proof of their commitment to lower their carbon footprint.

Particulars on the timeline for the Nuro have not been disclosed as of the time of press, except to say that pre-production is underway. Nuro has recently announced plans to build two facilities in Nevada, a manufacturing facility and a test track. Both these facilities will “produce and test tens of thousands of delivery vehicles per year.” BYD North America will help build the bots. 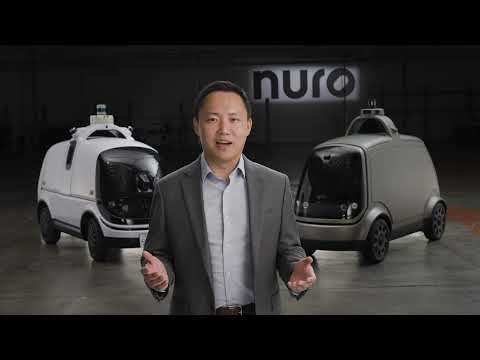