Watches are no longer essential for telling time, since we’re surrounded by gadgets that include a time-telling function by default. But that doesn’t mean they can’t stand out from the crowd when they’re doing it.

These days, watches are a statement more than anything. You can choose a very expensive piece or a very flashy one and be sure to get all eyes on you. You won’t even have to use it for the purpose it was designed for.

HYT watches bring back the pleasure of time-telling while also delivering the novelty factor. Created by the Neuchâtel, Switzerland-based watchmaker since 2012, they’re timepieces that stand out for using liquids and traditional mechanics to tell the time, with outstanding complications that add that extra oomph. Not that it was needed.

The latest from HYT are the Flow timepieces, two versions of which will become available. Like other releases under the name, they’re limited editions, with 25 items made for each version: there’s a diamond-stacked version and a piece with a vortex on the dial. Both are hybrid hydro-mechanic pieces, theatrical, beautiful and expertly crafted, and both come with a new complication that creates jolts of electricity at the push of a button.

While all this sounds like a lot on paper, in reality, these are not flashy watches. If anything, they come across as subdued, revealing all their intricacies to the careful observer who takes the time for it.

The idea behind the Flow line is that you don’t need electronics to have a beautiful or remarkable watch. What you do need is a creativity and the drive to make science work for you.

“In the boldly dynamic Flow timepieces, HYT takes the craftsmanship of mechanical watchmaking into a new age of enlightenment. Mechanics replace electronics as the unexpected catalyst of illumination, with a proprietary new complication generating light on demand. The resultant rays exercise their technically-sourced brilliance to reflect the energized momentum of current times,” HYT says.

Each watch contains a proprietary micro-generator that is triggered by a pusher. This micro-generator stores and dispels energy to several LEDs that light up the dial: 13 of them on the diamond version of the watch and 8 on the vortex one. The light pulsates like a wave, illuminating the watch piece by piece and “never allowing us to lose sight of time’s unstoppable flow.”

Being a HYT product, these Flow watches tell time with help from colored liquids passing through transparent capillaries around the dial. In the more expensive version, the liquid is blue – and black in the other. HYT says the capillary is time seen as a curve: the past is the colored part, the future is the section where there is no liquid, and we’re always stuck at the border between the two, in the present. It truly a very captivating spin on time-telling.

Aside from the proprietary mechanism with liquids and the outstanding complications, the Flow watches stand out for design. There’s a giant dome made of 73 baguette-cut gems totaling 1.7 carats on the more expensive version, and a tapered vortex shape that invites you to peer into the bellows of the watch, where the black liquid is stored, on the other, less costly version.

Both models come with a 51 mm stainless steel case without lugs, surrounded by the visual representation of wave that stands for the passage of time and the futility of trying to halt it. They come with a 65-hour power reserve and 30-meter (98.4-foot) water resistance. 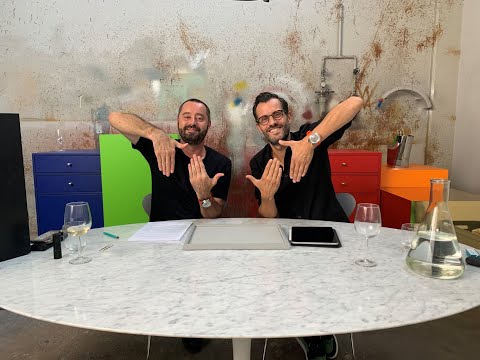