1 The Shark Boat Chevy Is Part Truck, Part Boat, and All Fun

2 The Cybercat Is a Cybertruck Catamaran That Can Turn Hydrofoil, Cyber Island or Boathouse

3 Atomic Camper Is Still the World’s Coolest Handmade RV, Still on the Road

4 The 1938 Vagabond, a Custom REO and Curtiss Aerocar, Is the Ultimate Luxury Motorhome

5 The 1959 Ford Country Squire Camper, the Pushbutton Dream Camper That Never Was
Car video reviews:
Up Next

They say you can’t have it all in life, but that clearly doesn’t apply to whoever built this awesome and probably not road legal frankenvehicle that goes by the name NautiTruck. If you’re on the market for a ride like a few others, this is a good place to start.
17 photos

Bringing a boat and a truck together in one single vehicle is not a novel idea, but this must be the most haphazard realization of it. As luck would have it, it’s for sale on the CarsAndBids platform.

The NautiTruck uses the frame and body of old vehicles, but it’s actually a new build – one that looks to have been put together with the goal of taking part in such events as Gambler 500 and the Concours d’Lemons. If you’re familiar with either name, then you know that this vehicle is all about fun and less about common sense looks or even practicality.

Using the frame of a 1986 Ford F-150 and the body of a 1983 Correct Craft Ski Nautique 2001 ski boat, the NautiTruck was born in 2020 when the seller (Barefoot Garage Jax on social media) acquired the donor vehicle. It’s still powered by the original, stock Ford 4.9L inline-six that would send 122 hp and 255 lb-ft (346 Nm) of torque to the rear wheels out of the factory but modified for more performance.

The seller notes that the NautiTruck is very heavy, which makes it “cumbersome on the road,” so whoever buys it won’t get that much driving around. It’s probably not road-legal, for what it’s worth. The longest stretch the NautiTruck ever did at 55 mph (88.5 kph) is 40 miles (64 km) at once. Whatever this contraption lacks in terms of everyday functionality, it makes up for in sheer wow factor – which can be negative or good, depending on who’s looking at it.

Under 7 feet (213 cm) tall and roughly 21 feet (640 cm) long, the NautiTruck still features the original boat controls on the right, with the steering on the left. In addition to modifications to the engine, the builder put in a new floor, a roll bar, and seating for five people – “custom,” the listing says, which is hilarious once you look at them. The odometer is missing, but the seller reports that it’s only been driven some 300 miles (483 km) since completion.

“The seventh-generation F-Series launched in 1980, though we don't imagine the brass at FoMoCo ever envisioned one of their iconic trucks mated to one of the oldest dedicated ski boat models in America,” the seller says. “Both, however, are still produced and available in 2022.”

The NautiTruck could be driven into the water, but it won’t float. It thrives in the mud, so it’s perfect for mud bogging, the seller says. 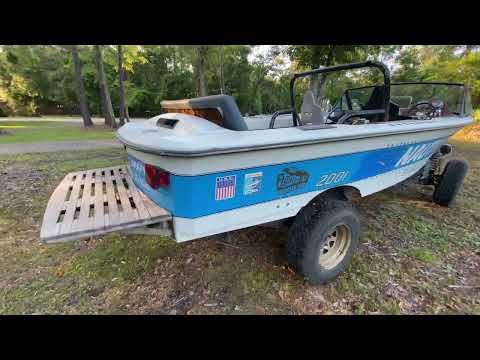 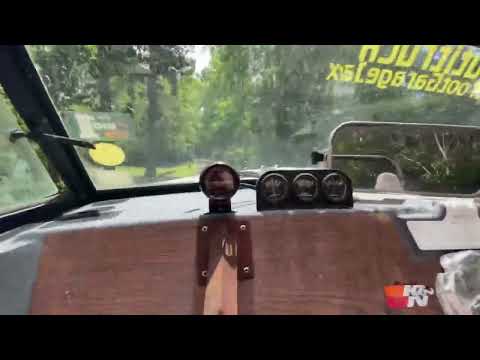