This was a task for the modern Sherlock Holmes: in a small French town, police were called to recover a cargo van perched – and perfectly balanced – on top of a bus shelter. After a week’s worth of investigating and reaching out to people on social media, the mystery has been solved. Phew.
7 photos

But first things first. Early on Monday morning, residents of Plounéventer, in Finistère, France, woke up to a strange sight: a white cargo van was sitting on top of a bus shelter in a local parking lot. There were no signs of a crash and, even if there had been, there was no chance the vehicle could have gotten up there without help. There was no damage either, neither to the bus shelter nor to the van itself.

Police were called and they were just as baffled as everyone else. As photos of the van began to circulate online, the story went viral, prompting several theories as to what might have happened. The most popular were that this was some form of statement art or maybe a marketing strategy. Police shut both down: they knew who the owner of the van was but he, the owner, could not explain how his car had gotten there. They only knew that the vehicle was placed and perfectly balanced there “discreetly” in the dead of night.

According to RMC (see the video at the bottom of the page, but enable subtitles if you’re not fluent in French), the mystery was solved after one week’s worth of investigations. During this time, police even reached out to people on social media for leads, admitting that this was the most baffling incident they’d ever seen.

As it turns out, this was the result of an ongoing dispute, but one that not even the van owner had the proper appreciation of. The cargo van itself was the subject of the dispute between the owner and the suspect, so the suspect stole it and hoisted it up on the bus shelter using a forklift. He then returned home, probably giggling at the thought of the kind of trouble the owner would get trying to get it back down.

Police have identified the suspect, so all’s well that ends well. 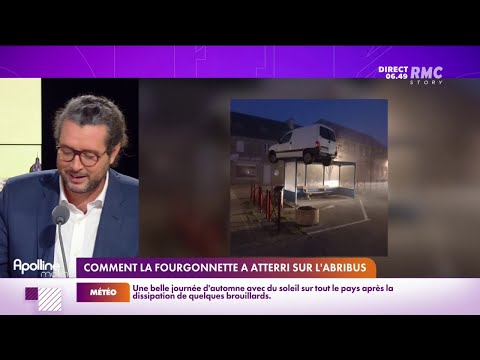