1 Ford Mustang S650 Will Be Difficult to Tune, but Not Impossible

3 Dodge Charger SRT Hellcat Demon Is the ICE Muscle Coupe We Want, but Will Never Get

4 1970 Dodge Challenger Spent 46 Years in a Shed, It's a Rare Factory Sunroof Car

The Mustang GT Takes On the Dodge Charger SRT 392, One of Them Keeps Stacking Wins

Home > News > Auto Motorsport
Alexandru Boghiu
Comparing two similar cars will probably, at some point, end up with the age-old question: which one is better in a straight line over the quarter-mile? The 10-speed Mustang GT wants to demonstrate its drag racing prowess against the Dodge Charger SRT 392, but will it succeed? Well, let’s find out.
8 photos

Both cars are rear-wheel drive, and while around 661 lbs (300 kg) heavier, the Dodge also has some extra horses and torque. So, at least on paper, it could have the upper hand. Now, enough with the paper stats…Sam CarLegion put out a video today that can help settle the debate.

Whether you prefer one or the other, one thing that’s for sure is that both of these monsters sound furious, just like proper American muscle should. But which one will make Uncle Sam proud?

The Mustang seemed to be quicker off the line in the first race, getting a better launch. And sure enough, there it was, passing the finish line first. While both cars had a flawless launch the second time around, the Dodge still ended up chasing the Mustang, which kept distancing itself until it crossed the finish line first – again.

Now, having an opponent wipe the floor with you twice in a row can’t be fun, but the Dodge seemed to be no match for the mighty Ford. Not that it’s trash by any means; it’s just that the Mustang is a better car in a drag race. Or many, as in this case.

Still, there were 2 rolling races left, along with some hope for the SRT. And just when you thought the Charger was making a comeback, well, check out the video below to see what happens. 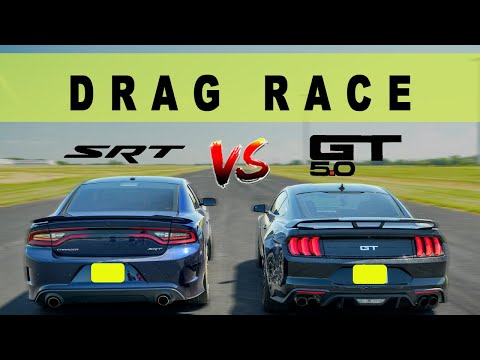