1 The 1930s Ford Model A House Car Was Ford’s First Attempt at a Motorhome, Awesome

2 Z-Triton 2.0 Is the Trike-Boat-Camper That Wants to Be World’s Most Sustainable RV

Melk Harley-Davidson Breakout Is All About Custom Ferrari Paint

The Mini Pop Bee Active Gear Is the Cutest, Tiniest Camper That Can Sleep 4 in Comfort

Elena Gorgan
You often hear that bigger is better and, in a very twisted way, a guarantee for happiness: a bigger TV, a bigger car, a bigger house. This isn’t a philosophical debate on the pitfalls of consumerism, because one Japanese company is letting their products do all the talking for them.
13 photos

That company is called Mystic, a long established presence on the camper market. Mystic makes a very popular type of camper in Japan, called the kei camper, and its latest offering is just as cute and surprisingly competent as you’d expect if you know anything of this Japanese sub-category of RVs. The latest model is also a spin on a flagship model from the company, now offered with offroad capabilities.

Meet the Mini Pop Bee Active Gear, a camper whose name evokes its seemingly paradoxical nature. It’s very cute and tiny and squee!, but it’s also offroad-ready and spacious enough to provide sleeping for four people in what seems to be relative comfort. It’s not exactly fitted for gourmet dining, but it beats eating out of a can inside a tent, since it still has a tiny corner kitchenette and outdoor dining space.

Mystic introduced the Mini Pop Bee a few years ago, and it proved quite a hit. Just in case the photos of the Active Gear model in the gallery fail to offer you an appreciation of the true scale of this thing, the video at the bottom of the page, of the earlier model, will do just that.

Even if it feels repetitive, we’ll say it again: this camper is incredibly small. When the pop-up section is not open, an average-height person can sit at the small table inside and will graze the roof with the top of their head. Thanks to the pop up, the camper offers standing height – 1.9 meters (6.2 feet) of it, for the sake of clarity.

The Active Gear model is, just like its predecessor, based on the Daihatsu Hijet truck, but you can also get it with a Suzuki Carry or a Toyota Pixis truck base. Total length is of 3.4 meters (11.1 feet), with a width of 1.4 meters (4.6 feet), but in this very compact footprint, you will find enough space to sleep three adults and one child.

With the pop-up roof deployed, you get a sleeping berth over the cab, which extends out and into the cabin on rails. Underneath, the small living area converts into a giant (*by comparison) bed, where another adult and one child can sleep for the night. One corner is occupied by the small kitchenette, which is actually just a tiny block with a tiny sink (and a 6-liter / 1.5-gallon water canister below) and the tiniest fold-down counter.

Like with the Mini Pop Bee, one side opens up and becomes a table for the outdoor dining area. It is here that you can set up a cooking spot with a portable oven, because you clearly won’t be doing any meal-prepping inside. The roof of the pop-up tent can be fitted with a fan, but this is not the kind of space in which you’d want to try out your master chef recipes.

The Active Gear model comes with Toyo Open Country tires, optional upgraded suspension, two or four-wheel drive, a front bull bar, and fenders. These also make up the bulk of specs that differentiate it from its older, less offroad-worthy sibling. A 105-Ah battery, LED lighting, and external power hookup are offered as standard, and optionals include a heater, a secondary battery and a small solar panel array.

In case you were thinking this tiny camper is simply too good to be true, you’re probably right. Prices start at 3.7 million yen, which is roughly $31,500 at the current exchange rate, but Mystic tells us that they’re only taking orders from Japan for the foreseeable future. Demand on the local market is high enough, but they do hope to be able to set up an international production system some day to cater to foreign markets as well. Fingers crossed. 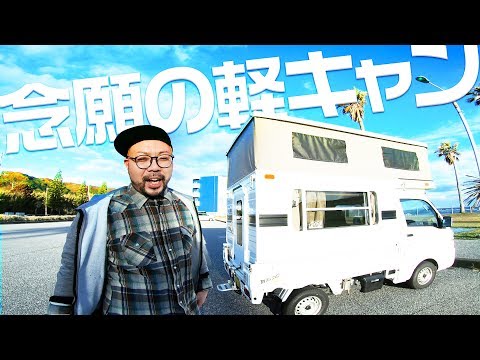