1 Remembering the 1968 Jayco Pop-Up Camper, the First to Use a Unique Ease-Up Lifter System

4 Bowlus Rolls Out the Volterra, an All-Electric Glamping Trailer With Off-Grid Capabilities

Some things are far too valuable (and awesome) to be put into storage, even when they’re no longer used. This is a story about one such valuable, with an upcycling twist that makes it even more of a standout.

Back in the early days of the RV boom, you couldn’t go any higher than a Spartan trailer in terms of luxury, quality, amenities, and the sheer size of available floorspace. Even today, Spartans of all sizes and layouts are still around, and many of them are still being used for the purpose they were designed for. This 1954 Spartan Imperial Mansion is an exception, and what an interesting twist it puts on the whole concept of upcycling!

Meet the Locomotive Ranch Trailer, a lake house slash summer retreat unlike any other because it’s built around the aforementioned ‘54 Spartan Imperial Mansion. Just to be clear, this isn’t a retreat that integrated the trailer in the final construction: it is a retreat built specifically with the purpose of integrating the trailer, conserving it, and giving it extended functionality at the same time. It’s a house built for and around the trailer, in fewer words.

Completed in 2013, this unique retreat is the work of Andrew Hinman Architects for a client whose family had had the Spartan trailer since the ‘50s. He wanted to preserve it while continuing to use it for family vacations – just not of the kind it was created for. So, the architecture firm anchored it in the difficult soil of Uvalde, Texas, overlooking the Nueces River.

Because of its location, the retreat had to be mindful of the environment and weather conditions, so Hinman opted for a steel-framed, metal-roofed cradle for the trailer. The trailer sits inside the cradle, above the flood plain, and with reduced impact on the fragile geology, while the cradle is anchored physically and visually by a concrete blockhouse. That would be the tower-like structure you can see in the photo gallery, which includes utilities, storage, and the most amazing open-air but screened loft slash bedroom you’re likely to see.

The interior of the Spartan has been kept true to ‘50s styling, with minimal, retro furnishes and formica countertops, and an all-bamboo finish to the walls and floors, but modern comforts like air-conditioning, and LED cove and mini-spots. There’s a lounge area, a kitchen with a dining area, a bedroom, and a very spectacular bathroom, where the bamboo comes in sharp contrast with exposed concrete. The soaking tub alone cost over $18,000 and had to be shipped all the way from Italy. The reported cost of the entire project is in the neighborhood of $1 million.

A porch with fiberglass mesh instead of the conventional screen surrounds the trailer, flowing into a deck with a sunken wooden hot tub and a separate deck that is actually an overhanging terrace over the river. From the latter, you go down to the watering hole or take in the amazing views.

The retreat offers ample living space, with the Spartan accounting for 150 square feet (14 square meters) of it, and is being used by the entire family as a hunting and fishing lodge or a holiday retreat. The pride of owning one of the most creative and awesome Spartan-based homes is a bonus to staying there, one reckons.

Available below is a short and rather low-quality video of the time the Locomotive Ranch Trailer was featured on the BBC show George Clarke’s Amazing Spaces, the same year it won the AIA Austin Design Award. A purist would argue that grounding a Spartan like that is a waste of a good Spartan, but if a trailer ever dreamed of being reincarnated into something else in its afterlife, this retreat would probably be it. 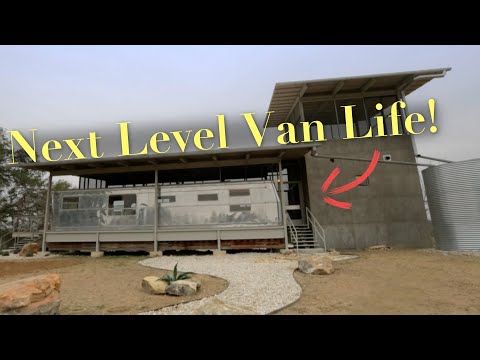