The Lo-Res Concept Car Sells for $111,111 Despite Controversy Over Build Quality

A modern icon and a most controversial concept vehicle has changed hands for $111,111, despite the fact that it’s nothing more than a glorified, rather unsafe, and completely not road-legal golf cart. The Lo-Res car is officially into new ownership.
26 photos

The Lo-Res concept car has been around since the late aughts and is considered today a modern icon of sorts. In reality, it was created as part of a promotional campaign by footwear company United Nude, an Amsterdam-based outfit founded by Rem D. Koolhaas, the nephew of the famous architect and designer Rem Koolhaas.

Earlier this month, the Lo-Res concept car emerged again, this time at auction on Bring a Trailer. It had been sitting for years on display at the Petersen Automotive Museum, but the time had come for owner Drive H2, a non-profit that focuses on sustainable transport, to cash in on it. The listing was the fourth prototype of the concept, which was the final one in the series and the most polished.

Last Friday, the auction ended, and the winning bid was for $111,111. That’s not a lot of money for a collectible slash classic car, but it is an impressive amount for a golf cart that can be driven anywhere. Power on the Lo-Res car comes from a USA ADC 5KW brushless motor and a 48V 120AH Li-ion battery. Still, it’s difficult to drive because of its wedge shape, terrible visibility, and rattles uncontrollably even at low speeds. Also, as a display piece, it was never equipped with stuff like mirrors or lights.

Consequently, the amount is very high given the backlash from the BaT community over the poor quality of the build. No one contested the premise of the concept (this is how a Lamborghini Countach would look if you applied de-resolution to it), but many took issue with the overall quality of the build, more so in the context where it was supposedly put together by actual artists.

That said, the final bid of $111,111 was just the right note on which the end the auction since it’s binary code for 63. Lamborghini was founded in 1963, so the new owner must be a fan. 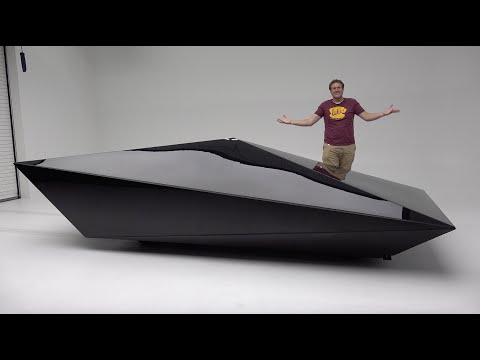