1 Lume Traveler Camper Lets You Sleep Under the Stars, Has Chef’s Kitchen

5 Tom Cruise Won’t Be Living Out of an RV After All, Even If It’s a Luxury One
Car video reviews:
Coverstory

The Tesla Cybertruck, arguably one of the most anticipated vehicles of our times, has seen more than a fair share of replicas in the year since its initial introduction. This is another one, of sorts.

We know that Elon Musk has plans to offer off-roading companions to the Cybertruck, a pop-up tent and trailer at first. At least, that was the plan back in November 2019, and it made sense. After all, when you have an all-electric truck that’s tougher than a tank, it would be quite a shame not to take it out on longer adventures, right?

It will be another while until the Cybertruck starts deliveries - in late 2021, if everything goes according to plan (and we should note that 2020 has made it a point of messing up everyone’s plans). It will probably take some time more until Tesla starts making off-road accessories, though. In the meantime, one Russian can hook you up with the perfect camper trailer. It even works with non-Teslas, but it’s clearly made to matchy-match your Cybertruck.

Meet the LandTraveler Cybertruck, a creation of Ivan Zheltonogov and the self-titled first Cybertruck in Russia. This isn’t a concept, and it’s not a render, but an actual camper that borrows design cues from Tesla’s all-electric truck. Built for autonomy, it’s compact (“minuscule” would be a more appropriate term), but still pretty stylish, though not the most comfortable or practical solution. Still, for being a first, it’s a decent attempt. Moreover, from what Ivan is saying on his social media, it sounds like he’s already sold a bunch of them, so it’s successful, too.

Ivan sells a camper called LandTraveler, and the Cybertruck version is a riff on the base model. It has a composite aluminum exterior and solar panels on the roof and swears by the angularity that made the OG Tesla into the most talked-about and “ugliest” title winner in late 2019. On aesthetic considerations, that’s a plus; in terms of practicality, it might work against the basic idea of comfort, which a camper should provide.

Access is done through the bathroom. The plus here is that, for its compact form, this camper has a full bathroom with dry closet, shower, and sink. The downside is that, to get inside the bedroom/dining room, you have to go through the bathroom, stepping right into and all over the shower. There is no door between the bathroom and sleeping/eating area (just a screen), so good luck with going number 2 when there are people inside. At least you get a skylight for ventilation, so there’s always that.

In the back, you have the sleeping and dining area. Ivan says the camper is made for two adults and one child, but it’s very short on storage. Aside from some cupboards in the bathroom, you have minimal storage in the back. The official description on the site also mentions a “kitchenette with a sink” that’s not shown in the first video below, but makes an appearance in the second one: a portable cooker that you can use – you guessed it – in the bathroom.

The table in the back folds out to expand the seating into a full-size bed, but the mattress/seat cushions are so thin you can’t possibly get a resting night’s sleep on that thing. You probably won’t mind it that much, though, since you could spend the entire night awake, staring at the stars through the generous panoramic roof.

The LandTraveler Cybertruck has a 100-liter (26.4-gallon) water tank, a diesel autonomous heater, two 12V 100W solar panels, and two 12V 100A / h batteries, which, Ivan promises, are more than enough to run heating in the harsh Russian winter. Optionally, you can get a sound system.

The estimated cost for the camper is 1.5 million rubles, which is roughly $19,600 at today’s exchange rate, but you can always mention a budget and Ivan will work around that. 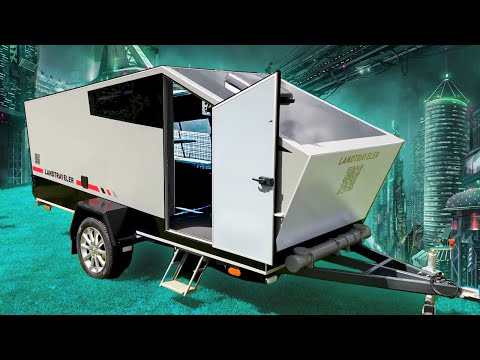