5 What If the Lamborghini Aventador Successor Ends Up Looking Like an SC20 Coupe?
Car video reviews:
Space Junk

Just like the manual transmission, V12 engines are part of a dying breed. However, while the former was sacrificed in full-blown exotics for performance-related reasons, the latter will eventually die to make our planet a better place (ahem, emissions, ahem).

Lamborghini has been a fanatic when it comes to launching V12-powered supercars. The 350 GT from the 1960s has had one, and so have the Miura, Countach, Diablo, Murcielago, and ultimately, the Aventador. The latter was introduced back in 2011, and over the years, Lamborghini upgraded it, and launched all sorts of special editions, and derivatives based on the same platform.

As we already mentioned, the Aventador Ultimae is the last hurrah for Lamborghini’s naturally aspirated V12-powered supercar, as its successor will use a different recipe. We’ve already spotted several mules and prototypes of the yet-unnamed machine, and while it will still use a V12, CEO Stephan Winkelmann has confirmed, it will be assisted by electricity. We could speculate that it might get two motors driving the front wheels, and likely a dual-clutch automatic gearbox, but the truth is that the oily bits are a well-preserved secret. Thus, no one outside the company knows anything about it for now.

Rumors claim that the Aventador’s successor might boast in excess of 1,000-horsepower combined. Some speak of supercapacitors instead of normal batteries, whereas others believe that it will get a small battery pack. Whatever the case may be, expect a small zero-emission driving range, much better takeoffs due to the brand-new V12, electric motor(s), and DCT (dual-clutch transmission), and enhanced aero. It is understood that the front end will be inspired by the Terzo Millennio, whereas the rear might have some Centenario vibes.

Now, the Aventador successor’s hybrid powertrain won’t exactly be uncharted waters for Lamborghini, as you probably already know, they have already dipped their toes into this technology. The Sian is part-electrified, and they have several concept cars with electrical assistance too. One of them is the Asterion, which never made it past the show car status, despite rivals from Ferrari, McLaren, and Porsche having hybrid hypercars back then, such as the LaFerrari, P1, and 918 respectively.

Still, instead of launching a challenger to their likes, Lamborghini chose to expand the family with a third product, which has turned out to be a best-seller. Yep, that’s the Urus, which came out in 2018, and is about to get its first mid-cycle refresh this year. And speaking of new model launches, you’re probably aware of the fact that 2022 will be final year of non-electrified debuts for Lamborghini. Starting in 2023, every new car that they introduce will feature some sort of electrification.

In all likelihood, the plug-in hybrid version of the Urus will share its powertrain, albeit maybe with a few mods, with the Porsche Cayenne Turbo S E-Hybrid, and could debut in 2023. Since there are still some things left to test out, and make sure that everything works as intended in various environments, the Aventador’s successor might be due one year later.

And before wrapping it up, we have to remind you to take every alleged information about it with the proverbial grain of salt. Oh, and the renderings shared in the gallery above came via CarWow on YouTube, with the video, which talks about other stuff too, including the estimated starting price, being one mouse-click away. 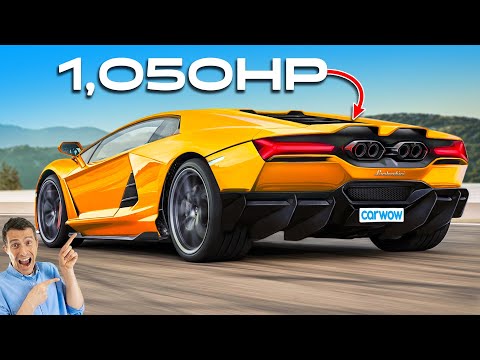