1 Alto R1713 Teardrop Trailer Does Things Differently, And Shines Because of It

4 NuCamp Tab 320 S Could Be the Most Equipped Teardrop Camper Ever: Cheap as Rocks

It’s easy to feel overwhelmed by the sheer number of possibilities for recreational vehicles. From big to small and oversize, to basic or modern or thematic, they all seem to have in common one thing: the desire to move glamping into a league of its own, separate from its origin point.

There is nothing wrong with that, one small company from Germany believes. As long as you don’t mind paying an arm and quite possibly a leg for it and, at the same time, ditching the idea that you could still go camping. “Camping is the most original form of camping,” Kleox writes on the official website (hat tip to New Atlas). This isn’t just a silly way of pretending to say something important, but the motto at Kleox.

We’ll explain. For some, camping remains the goal in and of itself, so all these other propositions, from motorhomes to RVs, tiny houses and campers, or even teardrop trailers, are simply doing too much in the way of interfering with it. Still, there’s no denying that camping does have some major drawbacks, from inclement weather to lack of comfort and a certain sense of unease at knowing that there’s only a thin layer of canvas separating you from who-knows-what lurks in the darkness beyond.

A while back, the founders of Kleox set out to upgrade the camping experience without changing it too much. They created a teardrop trailer that is less of a recreational vehicle as it’s an updated tent – one that doesn’t have all the drawbacks mentioned above. In doing so, they’re trying to appeal to a very specific niche of customer (those who still want to go out proper-camping), they refrain from going in direct competition with other RV makers, and are able to keep the price point very low.

The latest addition to the Kleox lineup is the Kleox Shelter, which is offered in two variants: the Shelter Travel, which is the “luxury” option, and the Shelter Basic, which is exactly what its name says it is. Just because it’s described as the “luxury” version, don’t expect to get that with the product: this is a teardrop that’s been stripped bare of everything, including the mattress, the shelves, and the kitchen in the rear.

Again, this is on purpose. The Kleox Shelter is what you get if you work to improve a tent: it’s a tent-like enclosure, but on wheels, and with a self-supporting, “indestructible” GRP (glass-reinforced plastic) shell that guarantees protection from the rain, wind and sun, and more comfort. There’s an upside to it being so bare, in the fact that it’s very light (210 kg / 463 pounds), so it can be towed even by a small car, motorcycle, trike, or EV. Total permissible weight is 750 kg (1,653 pounds).

Inside the trailer, you get 110 cm (43.3 inches) of height, a thick floor, and felted walls for a cozier, room-like feel. You also get two deep net pockets for storage, and two windows with insect screen and shades, and that’s about all. The rear of the trailer, where the kitchen is usually located in similar products, is actually the entryway, and you can fit it with a tent expansion that maximizes ventilation and interior space. It also helps you feel like you’re sleeping in a real tent, just in case you forgot it’s inspired by one.

Depending on budget, you can throw in other add-ons or, conversely, opt for the even cheaper and more basic option, which is a box on wheels. You could even use it for transporting stuff, if you need to, since the felt paneling and the windows are not included on the list of standard specs.

“Unlike most mini caravans or teardrop trailers, our Kleox trailers are not intended to imitate a caravan,” the Leipzig-based company stresses, lest you forget that this is not another teardrop trailer that boasts of bringing all the comforts of home on the road with you.

Instead, it’s just a basic shelter for camping, one that is easily towable and storable, and one that you will not have to break the bank for. The Shelter Travel starts at €4,990, while the Shelter Basic has an entry price of €3,990 – that’s $5,591 and $4,470 respectively, at the current exchange rate. 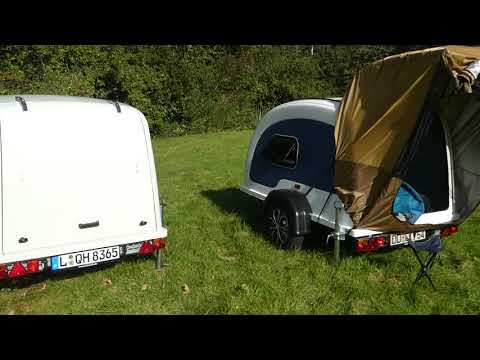