1 For the Modern Pirate: Caronte, a Superyacht That Can Carry Many of Your Toys

2 The Tetrahedron Superyacht Concept, the Boat That Can Fly But Never Did

Elena Gorgan
The general tendency is to go for the biggest, flashiest superyacht available. If you’ve got the money, why not splurge on a vessel that can take you around the world in the utmost luxury, right?
14 photos

Wrong. Well, at least partially. Back in 2010, Lazzarini Design set out to create a new solution for water mobility, one that would combine the luxury and comfort of a superyacht with a very small form factor. The result was something called the Jet Capsule and it would spend the next couple of years in concept stage.

The Jet Capsule has been around for all these years, even though you may not have heard of it. Hint: its exclusive pricing may have something to do with that, since the most basic units sell for upwards of $150,000, while the larger ones are at $250,000 a pop. In 2014, it was presented at the International Monaco Boat Show and caused quite a sensation: here was a tiny, cute thing that presented itself as a proper substitute for a powerboat.

The following year, the first order of the Jet Capsule was delivered. In 2018, the Jet Capsule was already being delivered internationally, to China, Spain and Canada. All Jet Capsules are built in Italy by Lazzarini partner S3 and come in a variety of sizes, possible configurations and propulsion systems.
Pierpaolo Lazzarini, the man behind the idea, is a former automotive engineer and, in creating this alien-looking vessel, he wanted to show that big is not always best. He specifically wanted something that looked like it’d belonged in space, but which would be powerful yet easily maneuvered even by a less experienced captain.

The target customer of the Jet Capsule was – and continues to be – the young millionaire and yacht owner looking for something more visually striking and perhaps more convenient than a boat. Based on a variable-deadrise powerboat hull, the Jet Capsule measures 7.5 meters (24.6 feet) in length and comes with a body made entirely of carbon fiber. It’s tiny and bubbly looking, but that is on purpose.

Depending on configuration, the Jet Capsule can seat up to nine passengers, and some models even include the possibility of adding a small kitchen and sofas that open up to sleeping beds, and a small private bathroom. Those have a more family-oriented functionality, but they’re still far from what you’d expect from a superyacht. As such, they’re probably not the best choice for longer stays out at sea.

The base model comes with a 325 hp Yanmar diesel engine coupled to a Hamilton waterjet and delivering a top speed of 25 knots. Again, other models have more powerful engines and higher top speeds – think along the lines of 35 knots.

Inside, you get the cabin with all the navigation apparatus and modern tech, and settees, regular passenger seats or a couple of benches with a table. It’s not exactly high luxury, but Lazzarini believes it’s just what a bunch of young people need for a night out on the water, or as a fast means of transportation (also on water, of course) between island clubs. Again, despite being labeled a mini “yacht,” the Jet Capsule was never intended to be anything more than a powerboat. And a small one, at it.

Whatever it doesn’t have in space, it aims to make up for by looking cool. The Jet Capsule comes with colorful underwater and interior lights, which add to the alien feel of the vessel, and a sunpad on the roof, accessible via a steel ladder.

Lazzarini Design always had a flare for the dramatic, and this Jet Capsule fits the bill just perfectly: it’s quite basic inside but delivers decent performance, and comes with a silhouette that’s bound to get all eyes on you no matter what.

Here are some videos of Jet Capsule models, set to dramatic music and with overly dramatic editing. People are supposed to be enticed to pay up to a quarter of a million dollars for them, it makes sense. 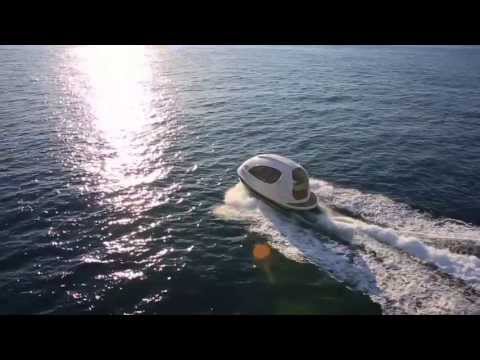 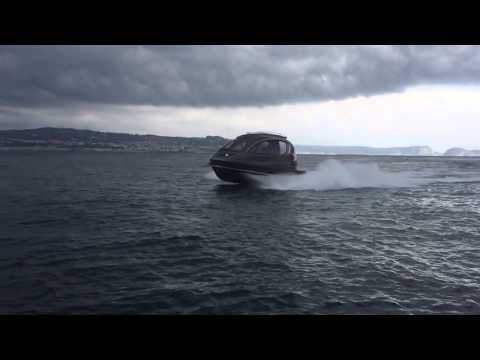