5 5 Coolest Cars Fitted With Motorcycle Engines That Made an Impact on the World
Car video reviews:
Up Next

Originally built by an Italian company known for its refrigerators, the Isetta was one of the most popular vehicles in post-war Europe. Two years after its introduction, it received BMW badges, helping the manufacturer avoid bankruptcy and becoming one of its most iconic models.

The Isetta Story: How an Italian-Designed Microcar Saved BMW From Bankruptcy

The first decade after the Second World War was a period of economic and industrial revival, particularly on the Old Continent.

In the early-1950s, in Italy, the market demand for small, inexpensive cars inspired engineer and businessman Renzo Rivolta to create one. At that time, he was the owner of Iso Autoveicoli the country’s third-largest two-wheel vehicle manufacturer, a company that, prior to the war, made refrigerators and other appliances. These roots were best symbolized by the refrigerator-like door, a feature that became emblematic for the microcar.

Revealed at the 1953 Turin Motor Show, the car envisioned by Rivolta was nicknamed Isetta, the diminutive form of Iso. It was the work of two young aeronautical engineers named Ermenegildo Preti and Pierluigi Raggi who created a tiny chassis around a 236 cc (14.4 cu in) two-stroke sourced from the motorcycles built by the company.

Although it was very small, its bubble-shaped body was designed to maximize space and could accommodate two adults. To facilitate access the hinged steering wheel and column swung out with the large front door and legend has it that on the first prototype an actual repurposed refrigerator door was used.

Performance-wise, the 9.5-hp engine meant the car needed over 30 seconds to reach 31 mph (50 kph) but that didn’t stop several owners from entering Isettas in the legendary Mille Miglia endurance race in 1954.

While the standard model wasn’t extremely popular and was discontinued in 1956, the commercial version called Isettacarro (or Autocarro) was a different story. With a full-width rear axle and available as a flatbed pickup, enclosed truck, or a tilt-bed, it outsold its sibling in Italy and was also produced by Iso in Spain until 1958.

Rivolta wanted to maximize the profits of this vehicle in order to fund his other projects which involved the development of luxury grand tourers, so he decided to sell the blueprints and equipment to other manufacturers.

Among the companies that acquired the license for the Isetta was BMW, which was experiencing poor sales and was in dire need of a new strategy.

In 1955, war-torn Germany was in the process of rebuilding, and in the East, the Messerschmitt KR175 microcar emerged as an increasingly popular vehicle. Sensing the segment’s potential, the struggling Bavarians introduced the BMW Isetta 250 hoping that it could help revive sales.

Equipped with a modified version of the 250 cc (15.2 cu in) four-stroke from the BMW R25/3 motorcycle and an upgraded front suspension setup, the German version also had repositioned headlights and a soft-top sunroof that was designed as an emergency exit.

With the new 12-hp engine, the car accelerated reasonably faster and could reach a top speed of 53 mph (85 kph). This helped make it more appealing than it ever was in Italy, with more than 10,000 units being produced in the first eight months.

The resounding success of the model coupled with a change in regulations encouraged the manufacturer to improve it for 1956 with the revised 300 series. The engine now displaced 298 cc (18.1 cu in) and gained one horsepower but more importantly, its reliability improved. By October, a DeLuxe variant was introduced, and it featured a slightly redesigned body with sliding side windows.

The car evolved into a four-seater a year later with the introduction of the BMW 600, a stretched-out version with a more conventional four-wheel layout and the capacity to seat four. It was powered by a larger 19.5-hp flat-twin and was even available with a semi-automatic transmission.

Only manufactured for two years, 34,813 units were sold which did not meet the Bavarian carmaker’s expectations, partially because it was similarly priced as the far more popular Volkswagen Beetle.

Production of the smaller 300 continued until 1962 totaling close to 130,000 units (excluding the 600s) which made it the best-selling vehicle of its kind.

While BMW’s future was still in muddy waters throughout the early 1960s, the Isetta helped the company survive throughout one of its darkest periods and became a cult hero in the process.

Apart from Italy and Germany, the innovative vehicle was also manufactured under license by Velam in France, Isetta of Great Britain in the UK, Metalmecánica in Argentina, and Romi in Brazil.

More than half of century later, the tiny car is recognized as having a big impact on the automotive industry in its era and for inspiring future microcar designs like the 1998 Smart Fortwo. A modern, all-electric successor heavily based on the original Isetta is also being developed by Swiss company Micro Mobility Systems. called Microlino, it’s set to take the streets soon with a starting price of around $14,000.

If you want to know how it's like to live with the smallest vehicle to ever use BMW badges, we recommend you watch this video by Petrolicious where owner Jack Charney showcases his 1957 Isetta 300. 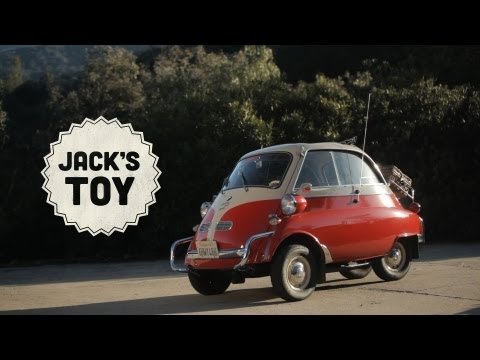