"This guy must have spent a fortune on this rig" is the inevitable thought that comes to everybody's mind when they see what YouTube user Shane Parish did with one of the rooms of his house.
1 photo
"He could have bought a real race car with that kind of money" is the inevitable second, and you could be right (he certainly could have gotten himself a regular one, because he says so himself at the beginning of the video). But whatever the man does with his money is his business, as long as he's not funding terrorists or paying for child pornography.

Finally, after two failed ones, a thought worth having springs to mind: "I wish I had one of these things myself." Don't we all? Even if you do own a racing car, it's not like you can drive it every night before you get to bed, right? Thanks to many hours of work and possibly some financial efforts, Shane can get as close as it is humanly possible to driving a car on a circuit without leaving the comfort of your own work.

On March 20, he uploaded a video that shows the amazing level of detail that went into making his crazy rig. It's so vast, it's even hard to figure out where to begin. The video lasts for 12 minutes, so there's another indicator of the complexity that is to be expected.

We're not crazy about everything he's done with it (we don't particularly like the checkered theme nor the blue lighting, for example, but those are just subjective aspects), but on a technical level, it's damn right impressive.

He's got four curved Samsung LED 32-inch displays, tons of BOSE speakers, a mammoth of a PC, a real NASCAR steering wheel, more buttons than a spaceship and a real, analog speedometer. He's also made good use of another advantage a simulator such as this has over actual driving by installing a cup-holder for the beer bottle. 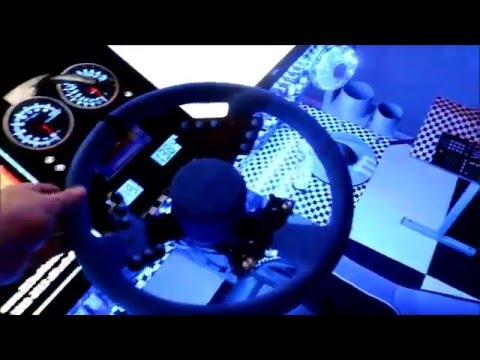