5 The Baluchon Siana Tiny Home Is Tiny but Incredibly Accommodating
Car video reviews:
Up Next

Tiny homes are, by definition, tiny. Better said, one would expect them to be so: recent trends have shown an inclination toward bigger designs, the kind that slip out of the tiny home category and into that of proper homes, but on wheels.

The ia Orana is not one of those. It’s a tiny home of very compact dimensions, that makes the most of them without feeling cramped or, for that matter, inelegant. If anything, it’s a very elegant way of showing that bigger isn’t always better.

ia Orana is the latest build from French maker Baluchon, a name that, to tiny house enthusiasts, must ring familiar. Baluchon makes beautiful tinies of all sizes, either as half-builds or turnkey projects, which stand out for their chic styling and that ever-elusive French je sais quoi. They’re rustic-looking but very modern and quite comfortable on the inside, making the most of whatever space they have.

ia Orana is not the smallest tiny from Baluchon – that would be the striking Nano, which sits at just 3.3 meters (10.8 feet) long but is still able to pack inside everything you’d need for a comfortable short stay – but it is noteworthy on its own. It’s smaller than most mobile homes we’ve looked at, but strangely enough, it doesn’t feel that way because it uses extensive glazing to blur the line with the outside world.

Designed on commission for a very exacting owner and located in Haute-Savoie in the French Alps, ia Orana (which means “Hello” in Tahitian) can sleep two people. Currently used as a permanent home, but it’s clearly better suited for a single occupant, given that it sits on a double-axle trailer of just 6 meters (19.6 feet) in length. The frame is spruce, clad in cedar, with cotton, linen and hemp insulation, like other Baluchon builds.

Unlike other tinies from the maker, this one features extensive glazing: almost an entire wall of it, including the large entrance, which is almost 3 meters (9.8 feet) high. The idea is to open up interior space as much as possible, to avoid feeling cramped inside. The owner will be adding a deck outside the glass wall, thus extending livable space on the outside, and is considering a wall-mounted garden.

The tiny itself contains a well-appointed kitchen and a living room that serves as dining room and office at the same time. Furnishes are rustic-looking, comfortable and stylish, with a sofa, a small coffee table and an even smaller oak desk in the corner, allowing the owner to get some work done while occasionally checking the view outside.

The kitchen comes with a two-burner unit and a freezer (there’s no fridge at the owner’s request), a sink, storage space underneath and above, and an integrated ladder for access to the upper cabinetry. The bathroom is on the right, with a generous shower, dry toilet and sink with vanity. A washer / dryer is also located here. While many tinies will sacrifice the size of the bathroom for more living space, this particular owner chose the other way around: you can downsize as you want, but not when it comes to bathroom comforts.

Over the bathroom is a mezzanine containing the “bedroom,” technically a two-person mattress with additional shelving for storage. Access to this area is done via a removable wooden ladder and, even though you can tell from the photos that this is a cramped space, it’s made to feel larger through more glazing.

ia Orana has a water heater and LED lighting – and that’s about it. Like most tiny makers, whoever wishes a variation of this model can add whatever creature comforts they think they couldn’t live without – as long as they can afford it. 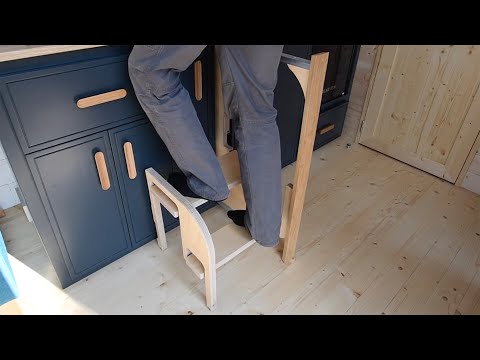