2 Top Gun: Maverick’s Mach 10 Darkstar Is a Sign of Military Aircraft to Come

The famous Franco-British supersonic airliner Concorde marked an important milestone in aviation and was at the same time a symbol of speed (duh) and luxury. The Concorde was also a failure, due to a variety of factors, including very high costs, high noise pollution and emissions, and the tragic crash of July 2000.

But if there’s one thing man knows how to do (or should know, at the very least), that’s to learn from past mistakes. One designer believes the supersonic dream is not dead and, if you add a more environmentally-friendly twist to it, it could actually be the future of the aviation industry.

That man is designer Oscar Vinals of Ovis Design, whose concepts are back in the spotlight amid growing concerns over the huge carbon footprint of current airliners and the need to go greener without sacrificing efficiency. We’ve discussed a couple of his other designs, the Sky Whale and the even bigger Magnavem, both of which are hyperplanes designed with particular attention to scale and luxury amenities. The Hyper Sting also falls in this category of hyperplanes though, by comparison, it’s like the younger and more timid sibling of both.

The Hyper Sting is not a new concept, being first published online a while back, but like much of Vinals’ work, it, too, is getting fresh traction online. Also a while back, Vinals was saying that his work wasn’t meant to be “only beautiful or for a sci-fi experience,” but was “based on previous technician studies with a lot of accurate information, so the result is a realistic and feasible concept.” He’s asking that we keep that in mind when looking at the Hyper Sting, which he considers the future of airliners.

Inspired by the Concorde, the Hyper Sting is an airliner whose name comes from the sting-like nosecone, which serves to control the front airflow and redistribute it over the wings and the central part of the aircraft. It is twice as big and twice as fast as the very real Concorde though, and would also be cleaner and more efficient than it. All this is just on a purely theoretical level for the time being, because the technology that would help with propulsion doesn’t yet exist.

“Concorde was a brilliant piece of machinery, a noble experiment, but it put too many emissions in the environment, too much noise into our communities, and was too expensive to operate,” Vinals says for The Sun. “A new era of supersonic flight might be just around the corner, but there are challenges to overcome when it comes to flying faster than the speed of sound.”

With a total length of 328 feet (100 meters) and a wingspan of 168 feet (51.2 meters), the Hyper Sting would accommodate 170 passengers. Compared to the Magnavem, and constricted by the smaller dimensions, Vinals keeps the interior more realistic: though of the future, this airliner would look very much like the airliners of today, with rows of seats and an aisle between them for access. On the gigantic Magnavem, he imagined luxury suites and private spas, and even entire wellness areas for the business class. So, in this regard at least, the Hyper Sting sounds more feasible.

That is, until we talk propulsion. Vinals says the Hyper Sting would be powered by two ramjet engines fueled by a cold fusion nuclear reactor, which exists only in theory as of now. This would allow it to travel from London to New York in just 80 minutes, hitting speeds of Mach 3.5 (2,486 mph or 4,000 kph), while still having a reduced carbon footprint and reduced noise pollution. The active variable geometry wings would boost flight efficiency.

It’s never a bad thing to dream of a better future, but maybe this is more than a dream. “Today, there are some projects for a new era of supersonic flights from different private and public initiatives, some of those are well underway and could become in a few years a real concept,” Vinals says. The Hyper Sting could be one of them, or so he’d like to believe. 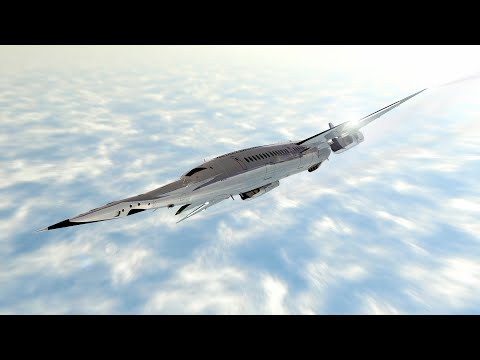