1 For This BMW E30, Beauty Lies Under Dirt and Grime, Watch It Shine Like New Again

The Highest Mileage AMG in the World Gets Cleaned With Dry Ice, Looks Better Now

Sebastian Toma
Back in the early 1990s, Mercedes-Benz released its first C-Class, and it was the company's replacement for the 190 series that is currently viewed as the grandfather of the range. The C-Class W202, as many enthusiasts refer to it today, was also the first car to be co-developed by Mercedes-Benz and AMG, and the result was called C 36 AMG.
8 photos

Its world premiere was in September 1993, during the IAA, the Frankfurt International Auto Show. It marked the beginning of a beautiful friendship.

Well, that is an understatement, as the Stuttgart brand eventually acquired the Affalterbach specialist, and AMG has been a part of Mercedes-Benz for a few years now.

However, the C 36 comes from a time when the two companies were different entities, and they had to work together on something for it to become reality.

Before the C 36 AMG, the performance variant of the C-Class's predecessor, the W201 or 190 series, had a Cosworth motor under its hood. While the latter is worth big bucks today, the former was equally special, as it came with more power, a 1.1-liter increase in displacement, and two extra cylinders.

The biggest difference was the fact that the AMG company and Mercedes-Benz had co-developed a performance version, and we dare write that it has aged nicely.

It has yet to reach incredible values, such as its predecessor had already achieved through scarcity, but it might happen once the world realizes it runs a bit low on W202 C 36 AMGs.

It may be a matter of time, but there is a risk it might never catch on, as its period-correct rival, the BMW M3 E36, also encounters in today's market. The same process happened to other models just before they were popular, though, so you may never know. So do not spend anything you cannot afford to lose on one of these.

Neither the E36 nor the W202 car got the love, respect, or resale values as its predecessor, despite being safer, with more creature comforts, and more power.

That does not mean these cars come cheap but getting one as an investment should only be done if you can afford to keep it in a pristine condition while enjoying it for years and years and being able to afford all that without hoping for a huge payout.

With all that behind us, watch what is the world's highest-mileage Mercedes-Benz C 36 get dry ice cleaned. It has 500,000 miles on the odometer, which means 806,281 kilometers, so roughly to the Moon and back, and with plenty of mileage to spare.

As you can observe, the vehicle is in quite a good condition overall, but dirt and grime do not forgive. Fortunately, the dirt goes away to leave a clean body behind. 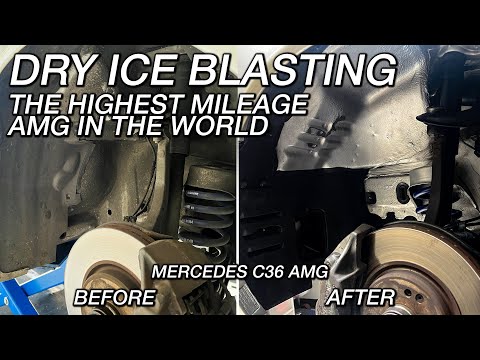