1 Splach Teases 2,600W Heavy-Duty Titan, Touts It as the SUV of the E-Scooter World

2 Premium Features at an Affordable Price, That's the New Splach Twin Scooter in a Nutshell

5 Splach E-scooter is so Powerful, It’s Nowhere Near Street Legal for Europe
Up Next

The Heavy-Duty "SUV of the E-Scooter World" Is Here, Ready to Unleash 2,600W of Power

Cristina Mircea
The off-road “SUV of electric scooters” is finally here as Splach launches its heavy-duty Titan two-wheeler, a full suspension beast that promises to deliver the most adventurous rides.
12 photos

About two weeks ago, Splach teased us with what looked like a very promising electric scooter. Now the manufacturer launched its powerful but nimble Titan on Indiegogo and it doesn't disappoint one bit.

Those who are familiar with the manufacturer’s wheelers know by now that Splach has some really beefy, barely street-legal scooters in its lineup. Its Turbo or its 2-in-1 Transformer two-wheeler are just a few of its popular models, and the new Titan puts them both to shame.

Advertised by Splach as a heavy-duty but nimble vehicle built for both on and off-road adventures, the Titan is compared to an SUV on two wheels. It features a wide, 8.7” x 21” (22 cm x 53.3 cm), comfortable deck covered by a non-slip rubber mat, comes with premium full suspension, 9”x3” (22.8 cm x 7.6 cm) all-terrain tires, and plenty of LED lights, including colored ones on the sides, which can be customized to your liking via a mobile app. It also boasts a remarkable ground clearance.

With its aviation-grade aluminum frame and all the components mentioned above, the Titan weighs 64.5 lb (29 kg). It has a payload capacity of 220 lb (100 kg).

Splach made a fast and furious beast out of the Titan, equipping it with two 1,000W motors with a peak of 1,300W, which means a total of 2,600W of power at your fingertip. The scooter gets from 0 to 30 mph (40 kph) in 3.9 seconds and can reach a top speed of 37 mph (59 kph). Riders can choose between 12 speed modes using the Turbo/Eco and single/dual motor buttons on the handlebar, as well as the 3 gear modes on the scooter’s display. There’s also a horn button on the handlebar.

The Titan also boasts unmatched stopping power thanks to the front/rear disc brakes and the E-ABS, with the latter being activated at the push of yet another button.

There are so many other appealing features the Titan has to offer, too, such as an optional Airlock keyless system that lets you unlock the scooter with NFC key cards, an Apple AirTag holder, smart cruise control, and much more.

You can get the Splach Titan on Indiegogo starting at $1,149, with the estimated delivery date being this December. 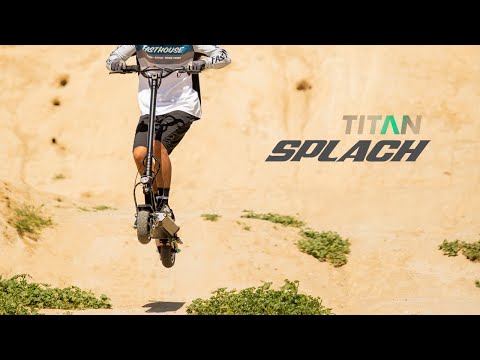