4 Russia Has the Toughest, Coolest Ambulance With the Shaman-M ATV from Avtoros

5 Kanye West Rolls Into Chicago in Fleet of Sherp ATVs to Hand Out Free Yeezies
Car video reviews:
Up Next

From the land that brought the Sherp ATV into the world comes another beastly, very competent but slightly cuter all-terrain vehicle called… The Hamster.

The Hamster, whose spelling in Russian includes Hamyak, Khomyak, or Homyak, is the strangest ATV to make international headlines in a long time. It was first revealed to the public at the All-Terrain Vehicle Trophy 2020, but word of its existence is just now starting to spread across the world. Yes, it hails from Russia, the country of the Sherp and the mighty, floating Tarus 2x2.

The Hamster was invented by engineer Eduard Luzyanin, who wanted an all-terrain vehicle that would go where a truck couldn’t. He created his own, out of discarded parts from other vehicles, and then proudly showed it off to friends. He was eventually talked into further displaying it and, according to this article in Uazbuka, into making a 2.0 version that, unlike the original, includes steering.

The Hamster draws power from a 150cc engine sourced from a Chinese scooter. There’s a 12-volt battery and an electric starter, while the single track is ripped out of a Buran snowmobile, as are the three pairs of shock-absorbing rollers. The steering mechanism isn’t taken from anywhere because there is no steering on this thing.

While powerful enough to tow a car and able to cross treacherous terrain, The Hamster only turns with some difficulty. Luzyanin says that if you’re riding on softer ground, like snow or sand, you can turn it like you would a skateboard by shifting your weight in the desired direction. If you’re on hard ground, you must use your foot to turn, or you can hit the throttle until it rears up and then dismount altogether to guide its turn by hand. That sounds more complicated than it is—or, at the very least, Luzyanin makes it look easy.

The Hamster is almost as tall as a kiddie bike, yet it can easily carry a grown man like Luzyanin. And he’s not even particularly slim. In addition to the weight of the adult, it can also haul stuff. To that end, it has two trunks, one in the front and one in the rear. One of them can be used to keep an extra canister of gas.

Luzyanin says that ATV has a 10-liter (2.6-gallon) gas tank and sips about 1 liter (0.2 gallons) per hour. Should you be out for more than 10 hours, you can carry a 5-liter (1.3-gallon) canister with you. An LED headlight is also part of the package.

Underneath the seat is room to store your tools. Luzyanin, for one, carries with him a small hatchet, a folding saw, a lantern, a compass, a thermos, and a 15-meter (49.2-foot) coil of rope. In short, stuff you’d need if you were out in the wilderness.

In case you were wondering how fast this beastly but cute motorcycle/ATV is, the engineer promises he took it to 43 kph (26.7 mph). That’s not a lot if you compare it even to mass-produced electric bicycles of the day, but for a home contraption, it’s decent enough. However, considering there’s no suspension on it, Luzyanin wouldn’t recommend anyone taking it past 20 kph (12.4 mph) for a more comfortable ride.

The Hamster weighs 85 kilograms (187 pounds) and it fits inside the trunk of a car or the bed of a pickup perfectly. Getting it out might make you break a sweat, but it’s an effort worth making, considering you get, in return, a pretty capable ATV for yourself and your tools, able to take you wherever you need to be. 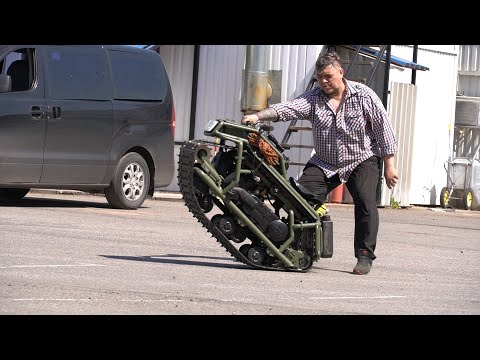