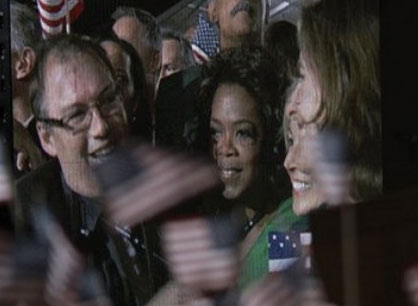 Electric cars seem to be really fashionable among VIPs and since getting the car of the future is chance to see how much we care for saving the planet, the 100th Tesla Roadster sold is definitely worth mentioning it. Especially when it has to do with Oprah.

Who? Well, it's not exactly the famous black TV presenter that purchased a model but someone who seems very familiar to her. Of course, being around such a celebrity as Oprah will surely stir general curiosity so, for those who don't remember the election night and Obama keeping his historic speech, in the VIP section, Oprah was weeping and leaning on the shoulder of some white fat nerdy-looking guy. He's exactly what Tesla Motors will call the special customer who was handed the keys to the 100th Roadster, earlier this week.

The man has been presented in her show as a certain “Sam” who flew to Chicago because he wanted to see Obama's speech. In fact, it turns out that “Sam” or Sam Perry, officially, is a very wealthy Silicon Valley business consultant and ardent campaign supporter of Barack Obama. Combining the support for first black US president with the desire for a greener future, Sam wasn't bothered to pay $109,000 for a new Tesla car.

In fact, Tesla is fighting at the moment to get its small slice of  the government loans. It only craves for $350 million, money that would go towards developing its next all-electric model producing more batteries, expanding its drivetrain business and dropping the price the Roadster from $109,000 to just $57,000. And of course someone has to pull some strings so Tesla could just not skip the opportunity of linking Mr. Perry to Oprah and her connection to the President Elect to get the money. Good job, guys!