5 Rare 18-Mile 2019 Ford GT Goes Lightweight to Stand Out in Any Supercar Crowd
Car video reviews:
Up Next

After a couple of social media features with the 2021 Ford F-150 Raptor triggered by the official introduction of the Blue Oval’s third-generation high-performance truck, we’ve been hit by an eerie “radio silence.” Luckily, the curtain has been lifted by Ford Performance’s YT channel just in time to see the off-roader flaunt its design connections to something even cooler.
8 photos

Many will argue that you can’t get any better than playing with a supercar on a racetrack or handle the high-speed off-roading craziness of a high-performance truck. But just about anyone who’s ever flown an aircraft will also add that to the bucket list.

No wonder automakers like to bridge the gap between four-wheeled creations and the aviation world as often as possible. And Ford is well known for its propensity to do so, judging by the numerous models it has figuratively taken to the skies.

This time around, the Mustang Mach 1 isn’t coming into focus, as Ford Performance decided it was time for Tom Liu, the lead exterior designer for the 2021 Ford F-150 Raptor, to share the story of how the Lockheed Martin F-22 Raptor came to inspire its dune-bashing namesake.

We all know that Ford hasn’t named the ultimate F-150 after the stealth jet fighter, but it simply couldn’t skip the occasion to link the two either. As such, the company claims the air superiority fighter “served as inspiration for key design elements” of the 2021 truck, such as the newly added front fender vents that resemble the two air intakes of the F-22 or the winged hood vent and the slots in the grille, among others.

It’s also not just a marketing gimmick because the Blue Oval genuinely tries to connect the F-150 Raptor to military personnel, as even some of the armed forces-focused publications have noticed certain Easter Eggs are references to the F-22 Raptor.

Unfortunately, these connections will only remain at a styling level, as Ford Performance probably isn’t thinking about adding a second engine to the F-150 to make it a bit more like the twin-engined Mach 2.25 (1,500 mph/2,414 kph at altitude) stealth wonder... 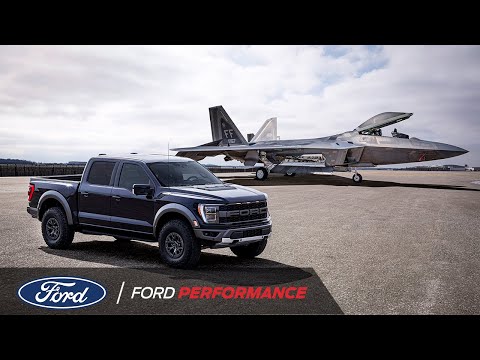