5 Gucci’s First-Ever Collectible Is an Epic Cadillac Seville Brimming With Luxury
Car video reviews:
Up Next

Home > News > Videogames
24 Nov 2021, 23:46 UTC ·
by Cosmin Vasile
Hot Wheels Unleashed is getting a brand-new car this week. After launching its DC Comics-themed car bundle earlier this month, Milestone has just announced a new partnership with Mattel to bring the bulky Cadillac Seville by Gucci into their game.
6 photos

The 1:64 scale replica of the iconic Cadillac Seville by Gucci is available starting today to all players that log into Hot Wheels Unleashed. The new car can be found in the Collection tab and it’s free on all platforms, including PC, PlayStation, Xbox, and Nintendo Switch.

Despite its bulky look, the Cadillac Seville by Gucci, which was the result of a collaboration with the Italian fashion house, was highly sought after by car lovers and fashionistas alike. We have no doubt that this would sell out instantly today, just as it did when it launched on the market back in 1979.

The limited-edition “Gucci Seville” was available in only three colors: white, black, and medium brown. As seen in the video, the exterior features many indicators of the Gucci identity, such as a vinyl top covering the “c-pillar” and having the iconic Gucci interlocking double “G” fabric pattern, the interlocking “G” on the wire wheel covers, a red/green stripe across the lower edge of the trunk lid, and an interlocking double “G” hood ornament decorated the exterior.

Not to mention that a full set of Gucci luggage was included with the car and could be found inside the generous trunk. Of course, all the Gucci-themed stuff came at a price, so customers had to pay about 23,000 for the “Gucci Seville.”

A crossover between the American glamour and Italian lifestyle, the Cadillac Seville by Gucci is actually a decent car both in real life and in-game. If you happen to own Hot Wheels Unleashed on any platform, try bringing the new car to a multiplayer race. You’ll be surprised by how well it performs. 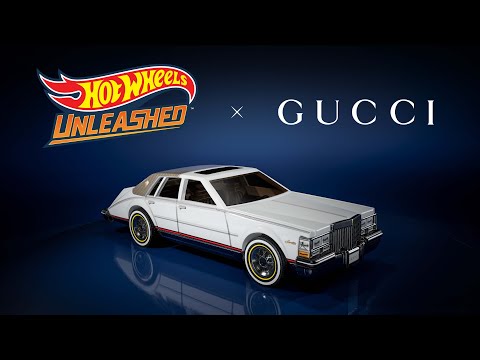