2 The Jeep Hackers Are Back With More Tricks, They Show More Damage Could Be Done

3 Hacking a Car Might Lead to Life in Prison, According to New Bill

5 Hack Your Car and You Could Get a $100,000 Fine from the Government
Car video reviews:
Coverstory

Not to be a bearer of bad news twice in just a couple of weeks, but recent happenings and a little background checking have made me reconsider my stance on the not-to-distant future of the automobile.
In the last couple of decades or so, technology found in consumer appliances has evolved at such a rapid pace that cars have been left behind. Heck, you could still buy a Lexus SC 430 with a cassette tape player as late as 2010, when smartphone computing power was already getting better than that of an average PC from the early 2000s.

Realizing the error of their ways, some carmakers have since begun to not only catch up but try and get back in front, skipping a couple of steps in between. While ten years ago you could only find a self-braking system in some of the most expensive models on the market, nowadays you can even get a Volkswagen Golf to parallel park itself for you.

I don't want to get into the self-parking features that a lot of cars have now, though, but into all the technology that has recently started to take over cars in general.

More and more cars nowadays are getting so hi-tech that they no longer resemble regular cars, but futuristic means of transportation out of a dystopian novel. Not trying to sound like an old fart, “get off my lawn!” kind of guy, but maybe we could bring back some of the analog features that older cars had.

Stuff like a rigid connection between the steering wheel and/or pedals to the wheels would probably be a good place to start, since drive-by-wire is not necessarily the most dependable type of technology if you ask me.

Nevermind the lost feel of actually driving a car, which comes courtesy of pedals and steering wheels that are not directly connected to the wheels, but the downright dangerous situation that arises from this.

A car that's connected to the Internet is a beautiful thing at first glance, since in theory, it allows a greater amount of driving comfort and safety thanks to online satellite radio and, in some cases, even wireless updates to the vehicle's onboard systems.

On the other hand, since it also comes in connection with the drive-by-wire systems I mentioned above it can also allow a backdoor for baddies to mess with your car without even being in the same district as you.

There hasn't been any Tesla hacked from the distance yet, but car hacking is real, and we're not far from entering an era where any car will be able to be controlled from afar using nothing but a laptop connected to the Internet.

Is that a scary thought? You betcha! Are we there yet? Not exactly, but a bunch of Jeeps and Dodges can stolen using nothing but a laptop, instead of a professionally used Slim Jim or a slightly more modern code grabber.

Charlie Miller and Chris Valasek showed everyone that they could take control of the steering and brakes of a Ford, a Toyota or a Jeep also using a laptop, so we know that a lot of modern cars are already hackable.

As early as 2014, a Black Hat security conference in Las Vegas unearthed a grim truth, there are hundreds of cars from dozens of carmakers that have the potential to be hacked, and not all of them need an Internet connection. Some can be even hacked via their radio, onboard Bluetooth, keyless entry or cellular network connection.

Of course, (hopefully) there isn't yet a Bond-like villain with the knowledge and possibilities of hacking any car from the road, but if there will ever be one, millions of cars can be affected. Potentially, vehicle cyber security could also be related to large-scale terrorist attacks in the near future.

Don't think that I'm talking out of my rear end now, I know how all this sounds, but if the threat weren't real then FCA wouldn't have launched a 1.4-million cars recall that attempted to rectify this exact vulnerability in its cars back in 2015.

You have to ask yourselves, what would be cheaper for carmakers in the near future? Redesign their cars to be more analog, incorporate even more security in their onboard systems or simply wait for a large-scale hacking attack and then deal with the consequences? I'm willing to bet that none of the highly paid auto execs are seriously thinking about this in the long run, but the future is nearly here, and they need to act fast.

There is a storm brewing on the horizon, and all we can do is either let some of that analog back in or prepare for the worst era of car ownership. Maybe we don't need all that connectivity and the Internet of things in cars after all, or do we? 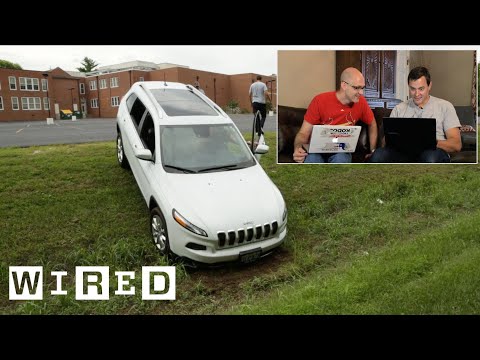 I Was Wrong About the Volvo EX90, But Volvo May Wish I Wasn'tSee all editorials