Despite building cars that failed miserably on the American market, the French company Aerospatiale has been producing this helicopter for more than half of a century, established world speed records, saved lives, and transported presidents and high-ranking officials. This is the story of the AS365 Dauphin.

In 1960, the French company Sud Aviation introduced the successful SA316 Alouette III. It was a booming model that evolved into a family of helicopters. By the 1970s, the manufacturer merged with the aerospace firm Aerospatiale and continued building aircraft. In 1972, they introduced the single-engined AS360 Dauphine, which was supposed to replace the SA316. However, even though the helicopter achieved three airspeed records, customers kept asking for the decade-old Alouette III.

As a result, Aerospatiale's management understood that they needed to do something about it. They didn't want to lose all the money spent on the AS360 program. So instead of dropping the ball, the company went on and invested more into it and created the twin-engined AS365. More power means more performance, and thanks to the new turboshafts, it was not only better in fuel efficiency but was less noisy.

Thus, in 1975, the new AS365 took its maiden flight, which was a complete success. Soon, the aircraft started to smash its predecessor's records, including an incredible speed run from Paris to London at an average of 322 kph (200 mph). But it had its flaws. For example, despite the aerodynamic shape inspired by dolphins (hence the name), it featured a fixed tricycle landing gear (two on the sides and one at the back) with an option for skis.

In 1979, my father brought me a poster with the AS365C, which I proudly put on the wall. I know, at that time, most kids preferred the Countach. But ever since then, I have been attracted by this beautiful aircraft and started to ask questions.

That helicopter was among the first in the world that featured a fixed main rotor for the blades. That allowed it to perform various acrobatic maneuvers, which were impossible to be completed by other aircraft. In addition, it didn't feature a regular tail rotor but the so-called fenestron. That consisted of 13 blades that rotated into an enclosed circular casing, which looked like a window (fenetre in French), hence the part's name.

But Aerospatiale was already in advanced studies with the next chapter of the Dauphine: the SA365N. Unlike the C-version, it featured a retractable landing gear: one up front and two on the sides. In addition, the N featured new, more powerful Turbomeca Arriel 1C2 turboshaft engines, which delivered 681 hp to the shaft each. The main rotor with carbon-fiber blades was kept, but the fenestron was improved to provide better efficiency. As a result, it could withstand even gunshots without affecting the aircraft's flight performance.

The cabin could have been arranged for VIP transport, medical evacuation, or army transport. Later, the N also evolved into various other versions, but it managed to stay on top of its game. In 1991, Aerospatiale. now part of the Airbus Industry, delivered the 500th unit to a customer, and by 2011, more than 1,000 units of this machine were flown worldwide. But, most importantly, some of them were delivered to the U.S. Coast Guard.

In 1979, the U.S. Coast Guard was looking for a short-range recovery helicopter, and the Dauphine AS365 looked perfect for the job. But there was a problem with the U.S. regulations, which required that at least half of the value of a foreign-made aircraft be American. Thus, the HH-65 Dolphin was made for the U.S.C.G. These were fitted with two Lycoming LTS101-750-B-2 units. Each of them developed 734 shaft hp, which apparently should work better than the French engines. But, in reality, things went south. In the initial stages, they revealed teething problems. Later on, pilots reported several power losses after the helicopter's weight increased.

By 1994, U.S.C.G. started looking for a new engine, and the final decision favored the Turbomeca Ariel 2C2 CG produced in Grand Prairie, Texas. It is the same turboshaft powerplant used on the Sikorsky S76 helicopter. Finally, the HH-65, now the upgraded HH-65B and HH-65B variants, regained their air superiority.

In its long career, the Dauphin gained some notoriety thanks to its abilities. For instance, in November 1991, a unique version fitted with Turbomeca Ariel IX turboshafts established an airspeed record for class E1e helicopters over a triangular course of 372 kph (231 mph). But, of course, that publicity stunt was mainly for the show. Buyers, on the other hand, appreciated it for its low noise. It was 3.1 Decibels quieter than OACI (International Civil Aviation Organization) standards. In addition, its cabin could accommodate up to 14 occupants, including two pilots. In VIP layout, on the other hand, could fit seven passengers enjoying total comfort. Unique versions, tailor-made for several governmental agencies worldwide, could provide even less than that, with a leather-clad interior and all the amenities of a luxury limousine, but in the sky.

And the story of the Dauphin didn't end. Nowadays, Airbus Industry continues producing the helicopter under the H155 name. By the time you are reading this article, somewhere, someone is flying a Dauphin either to transport a VIP or to perform a Search And Rescue operation. So stay tuned this Celebration Month for more stories about former glories of aviation. 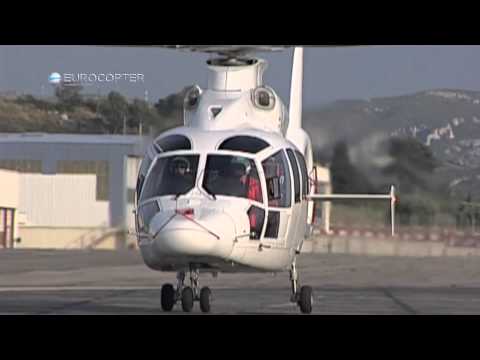