1 1957 Porsche 356A Gets First Detailing in Years, Becomes Concours-Ready Stunner

2 Porsche 930: One of the Most Dangerous, Yet Thrilling Turbocharged Cars Ever Built

3 2023 Porsche 911 Spied Yet Again in Turbo Version, Getting Closer to Its Reveal

4 Remembering One of Porsche’s Most Influential Models, the Iconic 911 Carrera RS 2.7

Forget the Corsair, This is the Real Most Important Navy Plane of WW2

Today, the name Abarth is synonymous with Fiat, but more than sixty years ago, the Turin-based company was responsible for transforming the aging Porsche 356 into a state-of-the-art racecar, a design that would later inspire the legendary 911.

Born in Vienna during the days of the Austro-Hungarian Empire, Karl Albert Abarth was fascinated with anything with wheels from an early age. As a teenager, he traveled to Milan in Italy, where he joined coachbuilders Castagna and began designing motorcycle and bicycle frames. He would return to Austria several years later, taking up motorcycle racing and becoming European champion five times.

A serious accident would put an end to his racing career, so he chose to move back to Italy where he eventually received citizenship and changed his name to Carlo Alberto. During those years Abarth befriended famous Italian racing driver Tazio Nuvolari, through which he met fellow Austrians Anton Piëch, Ferdinand Porsche’s son-in-law and future Volkswagen chairman, as well as Ferdinand Jr., better known as Ferry Porsche.

These relationships got him involved in the automotive industry, and after a short spell as sporting director of the Cisitalia racing team, he founded Abarth in 1949. Although the company's main activity was manufacturing performance parts for several Italian brands, a large portion of the profits went into the Squadra Abarth racing team. With a lineup that included talented drivers such as Nuvolari, Franco Cortese, or Piero Taruffi, the team was successful from the start, which attracted the interest of Fiat. Thus, in 1951, the company relocated to Turin, and the legendary collaboration began.

Still, the close connection with the Porsche family endured, and in 1959, Ferry Porsche commissioned Abarth to upgrade the 356 racecars which were beginning to struggle against the nimbler Alfa Romeo or Lotus cars. That year, FIA instituted a new rule allowing manufacturers to modify the bodies of their racers as long as the overall weight wasn’t drastically lower; exactly what the  boxer-powered 356 needed to become competitive once again.

Initially, a 356B chassis was sent to Turin where it was stripped of its original bodywork. Carlo Abarth analyzed the shortcomings of the old structure, and decided that it needed to be completely redesigned. Rather than creating a body himself, Abarth enlisted the help of former Bertone stylist Franco Scaglione, who was renowned for his aerodynamically efficient Alfa Romeo concepts.

After several drawings were reviewed by both Abarth and Porsche, a final design was chosen. Lower than the original 356, it had a narrower frontal area, inlaid door handles, and an adjustable scoop fitted on the engine cover, features that lowered the drag coefficient from 0.398 Cd to 0.365 Cd. Furthermore, all the panels would be constructed from aluminum, resulting in an estimated weight reduction of about 99 lbs. (45 kg).

The first prototype that Porsche ordered was fitted with a body handcrafted by a small Turinese coachbuilder named Viarenzo & Filliponi. When it arrived in Stuttgart in 1960, engineers were appalled by the poor quality of the work. Nevertheless, track tests showed a lot of promise, so this imperfect Carrera GTL was sent back to Italy, where it took part in the famous Targa Florio race. Driven by Paul Sträle, it managed to cross the finish line first in the 1600cc class, persuading the German carmaker to order twenty additional units.

Abarth pulled some strings and got a bigger company called Rocco Motto to produce the rest of the bodies. Although they were still being manufactured by hand which resulted in minor differences from unit to unit, the overall quality improved considerably.

In 1961, Porsche introduced a new version of the Carrera engine called 692/3a. With wider main bearings, more aggressive intake cam profiles, a smaller flywheel, or bigger Solex carbs, it was capable of delivering up to 165 hp. Several GTLs were fitted with this powerplant and in the years that followed, these Italian-bodied machines racked up class victories in many iconic races including the 1000km of Nürburgring, the Sebring 12 hours (twice), or the Daytona Continental. The GTL also won its class at Le Mans three times in a row (1960-1963).

Porsche stopped racing this model after the 1963 season, but several privateers continued to use it in various national, continental, and international competitions. That year, the company unveiled the successor of the 356 at the Frankfurt Motor Show. Initially called 901, but eventually rechristened 911, the new car’s design was inspired by the re-bodied GTL. To this day, there’s no official confirmation that the two designs were related, but as you can see in the video below posted on YouTube by Lyon Air Museum, the similarities between them are undeniable. 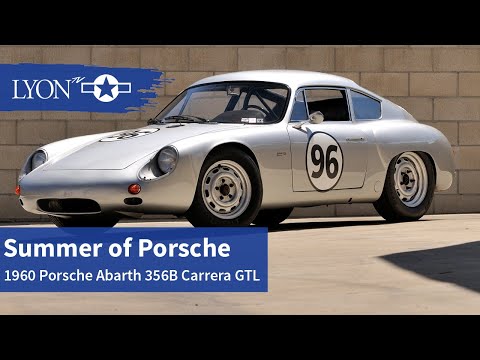