Ever wondered what 1,400 electric horsepower taste like? Of course not, because we humans are not in the habit of eating horsepower. But here’s an attempt at answering that question nonetheless.
9 photos

Back in July last year, at a time when it was still very busy advertising its electric SUV like crazy, Ford pulled the wraps off the 1400, a metal monster packing no less than seven electric motors—three of them on the front differential, and four others at the rear, pancake-style—good for 1,400 hp. All of them get their juice from a 56.8 kWh battery pack.

Track-bred, the machine has been the star of countless videotaped stunts since then, in the company of people like Vaughn Gittin Jr., Ken Block, Chelsea DeNofa, Hailie Deegan, and Joey Logano. It looks incredibly hot in all of them, but no one ever thought of associating that trait with… sauce.

Until now, that is, as Hot Ones’ “professional hot sauce eater” Sean Evan sat across a table from Gittin Jr. to try out the Mustang Mach-E 1400 Hot Sauce. That’s right, the electric Mustang in a bottle.

Now, given how Evan is a “professional hot sauce eater” and all, we’d have expected him to cope better with the assault of the hot substance, but he doesn’t. And neither does Gittin Jr., as he’s clearly not used to experiencing the Mach-E like this.

Now, we’re not told the ingredients that make up the sauce, but a quick look at the two men’s faces (check the video below) reveals pretty much all there is to know. We are, however, informed that just like the 1400 SUV is not meant for sale to the general public, neither will the namesake sauce, deemed too hot for consumption. 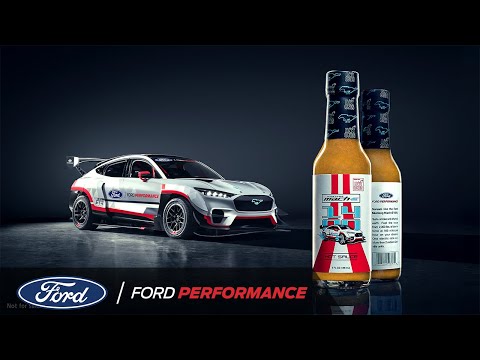