The Ford F-150 Lightning Is Cheaper To Run Than Gas, Diesel, or Hybrid Trucks

The Fast Lane drove no fewer than four half-tonners over 164.5 miles (264.7 kilometers) to figure out which is the cheapest to run. As the headline implies, these trucks are differentiated by their powertrains.
6 photos

Starting off with the most conventional of the lot, Nathan is rocking a 6.2-liter V8 under the hood of his GMC Sierra AT4X. The free-breathing small block is no slouch, but it’s also a thirsty engine despite its Dynamic Fuel Management system, an evolution of the Active Fuel Management system.

Andre chose General Motors too, but with a straight-six turbo diesel twist. Despite the 3.0-liter displacement, his Chevrolet Silverado is much obliged to match the peak torque of the GMC Sierra mentioned earlier. On paper, fuel economy is understandably better than the more enjoyable V8.

Roman picked the hybrid-assisted Toyota Tundra i-Force Max, which pumps out 437 horsepower and 583 pound-feet (790 Nm) of torque. Definitely not bad for a half-ton pickup that packs a twin-turbo gas V6 and a clutch-operated electric motor in the ten-speed gearbox’s bellhousing.

Last, but definitely not least, Tommy was tasked with driving the only electric pickup of the bunch. Styled in a similar fashion to the combustion-engined Ford F-150, the Ford F-150 Lightning comes exclusively with a dual-motor setup and independent rear suspension rather than leaf springs. Depending on specification, customers can expect anything between 230 and 320 miles (370 and 515 kilometers) of range according to the EPA.

As expected of a six-cylinder turbo diesel, Andre’s Chevy Silverado used nearly 6.1 gallons worth $31.67 across 164.5 miles. That’s 27 miles to the gallon or 8.7 l/100 km. As for Tommy’s F-150 Lightning, he had to wait 59 minutes to replenish the battery to 90 percent. 59 minutes including two failed charging sessions. As some would say, just Electrify America things...

Total cost? $25. Tommy highlights that charging at home would have cost him around $9.24, which is tremendously better than the ICE trucks. 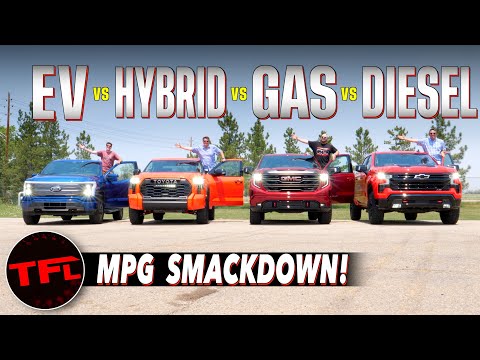