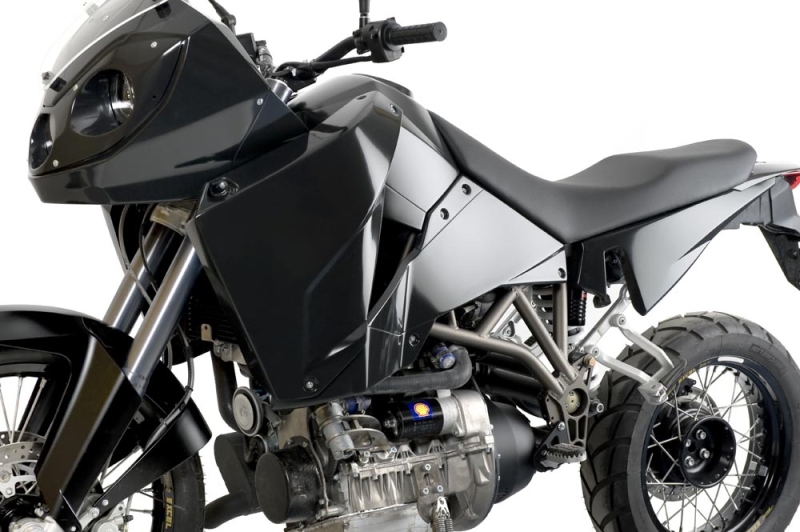 The Dutch company EVA, who has been working on a diesel motorcycle and a 2WD (two wheel drive) system for several years, has finally put them together, giving birth to “Track T800CDi”, the first 2WD Turbocharged Diesel motorcycle ever built.

The 800cc engine can run on standard diesel, bio-diesel or any other type of vegetal oil. The 50 bhp in-line three engine offers 130 Nm of torque from 1800 rpm up to 4500 rpm. The CVT (Continious Variable Transmision) is required in order to sustain the engine at low RPM, which is a significant factor in the fuel economy of 2.5 l/100 km of vegetal oil or 2.1 l/100 km standard diesel in a standard traveling conduit with a constant speed of 90 km/h.

Weighing 199 kg and with a fuel tank of 22 liters, this motorcycle can offer an autonomy of approximately 1000 km with slightly lower upkeep costs than a conventional motorbike.

According to the hellforleather magazine, the hydraulic 2WD is similar to the system developed by Ohlins, which transfers up to 15% of power to the front wheel, depending on the acceleration amount.

The price for the EVA Track t-800CDi 2009 is set to 17,500 Euros. Although it's quite an exotic bike at the moment, compared to other conventional motorbikes, you have to admit it's technically impressive.