2 Here’s a Lada Walking on Hind Legs, Because Everything Is Possible in Russia

4 The Karlmann King Is Still World’s Most Expensive SUV, Still a Dumb Idea

From the ashes of a world-famous lowrider, another, perhaps more divisive one was born. It’s a stunning, intricate work of art that stands out for the impressive amount of detailing, and a widely recognized custom build: The Final Score.

July is autoevolution’s Custom Builds Month and we’ll be honoring some of the most unique and memorable vehicles in recent times. You can’t have that without arguably the most divisive lowrider around, The Final Score.

The Final Score started out as a 1958 Chevrolet Impala Convertible that had been sitting in Chris Roark’s garage for nearly two decades by the time he decided to take the wrap off it and get to work. This happened at a time when his previous creation, the world-famous aqua-and-green-pearl lowrider known as The Perfect Score had just been totaled in a stupid, tragic accident.

As Roark himself explains in the late 2019 video at the bottom of the page, he and his mates from Tradicionals Car Club were coming back from a show when another car rammed into the trailer on which the Perfect Score sat. The trailer went over an embankment, cargo and all, and the lowrider was totaled.

Car accidents are bad as they are, but to see years of work and thousands of dollars destroyed in an instant must be particularly difficult. In the aftermath, as Roark struggled to deal with the loss, his team suggested he built another car. He says he didn’t agree to it out of a desire to come up with a replacement, but as a means to focus on something else.

The result was The Final Score, a truly superb lowrider that stands out for the sheer amount of detailing. Painted in a unique candy color that combines sunshine gold and pagan gold, with multicolor patterns that run throughout the body and into the engine bay, every piece on it has been customized. Roark estimates the tally is of about 600 custom pieces in total, but with a project that spanned more than four years, you can’t never really tell for certain.

Everything from the dashboard, which now includes a Dakota Digital gauge and custom center console, the steering wheel, the knobs, hubs and screws, and even the brake calipers have been customized in some manner. On its most recent appearances, The Final Score was displayed wide open, with the wheels removed, sitting on a mirror surface, which might seem like overkill but was absolutely necessary in order for viewers to duly appreciate it in all its glory. Even the undercarriage has been re-done throughout.

C&C Customs did the body, the engine and the undercarriage, while Tekni Kolor Kustoms did the paint job. Sammy De Leon, who had worked on The Perfect Score as well, was called in to do the murals, so unsurprisingly, some of them are tributes to this famous predecessor.

The interior is in delicate off-tan and comes in sharp contrast with the loud, extremely intricate exterior: ABC Upholstery wrapped 1967 Buick Riviera seats in fine leather and added dyed alligator inserts and custom logos. The engine is an LS1 from a mid-’80s Corvette, with a custom chrome and engraved radiator, custom air cleaner and engine cover.

Simply looking at the car and taking in all the details is hard work, which should offer a proper appreciation of what building it must have been like. Roark says in the aforementioned interview that he’s growing old and is not as quick and fiery as he used to be (aren’t we all?), but his son and nephew are keeping him on his toes and, where need be, taking up from him.

The Final Score has been named Lowrider of the Year by Lowrider Magazine in 2018; The Perfect Score won the same award for three consecutive years. These awards are just the tip of the iceberg when it comes to the type of recognition Roark has been getting in the industry: he also owns a silver 1957 Bel Air convertible known as Silver Legacy and a black 1958 Impala hardtop dubbed Dark Side.

Yet, he doesn’t consider himself competitive or itching to prove himself to the world. He’s just a guy with a passion and, even if he tried, he can’t quit it.

“When I look at the Final Score, I see engineering, craftsmanship and detail,” he says in the video. Others may not, but chances are even they show appreciation for the man’s work. 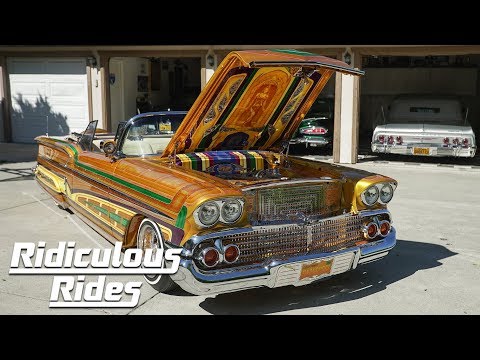